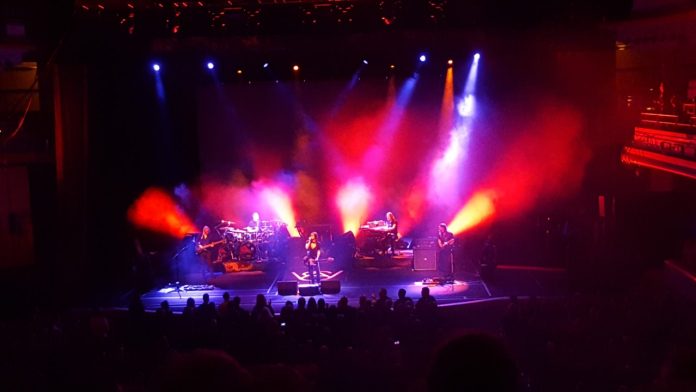 Who needs drugs when you can have your mind blown by the King of Prog?

Should you mention the name of Steven Wilson to a passer-by in the street you are almost certainly going to be greeted with a blank face or a quizzical suggestion that he’s a lesser known sportsman.  That’s the reality for a man who can walk anonymously down the street and then sell out two nights at The Royal Albert Hall. To his fans and the wider prog community he’s nearly a deity producing numerous albums firstly with his band Porcupine Tree and then branching out into trip-hop and ambient music under different guises before assuming his own mantle and releasing a number of concept albums leading up to 20016’s album To The Bone which is an unashamed homage to pop music – he speaks warmly of the influence Prince’s death had on his recent work, as if to emphasise the point.

Clearly catching quite a number of late arrivals out by starting just after 7.30pm the show starts with a series of images and words flashed onto the screen at the back of the stage designed to test your perceptions of the world. Most bands would start at set with a song designed to make an impact, but not this one. Starting with the radio friendly ‘Nowhere No’ and ‘Pariah’ these have to be two of the most beautiful and unlikely openers but the impact is stunning. In front of the stage is a translucent screen upon which is projected the image of Ninet Tayeb, the Israeli singer, who appears to float across the stage with the band playing within her. The screen is used several times more during the show to equally arresting effect.

Frontmen come in many guises. There’s Robert Smith from The Cure whose sole contribution to the show when I saw him was ‘thank  you, good night’ and then there are those like Steven Wilson who engage and tell the audience that he wants them to interact with him and the band, and they do!  He’s self-deprecating and not afraid to take the piss out of himself or his band of very highly talented musicians which includes the amazing Nick Beggs. Yes, him from Kajaggogoo.

The majority of the show is based around the current and previous two concept albums with three Porcupine Tree songs from a long long way back thrown in to acknowledge his past.  Wilson talks about the image problem that prog and rock and more particularly pop has, stressing that the two best pop bands were The Beatles and ABBA, both of which influenced the new album, from which there would be disco dancing.

The first half of the set ends with the 13 minute ‘Ancestral’ which starts slowly and then builds to a climax driven by Beggs on the Chapman Stick and is emphasised by the lighting and back screen images which throughout the show play such an integral part of it.

After a twenty minute break they’re back with ‘Don’t hate me’ which starts prog, moves into rock, then a bit of jazz fusion with some nifty piano work before ending where it started. Weird if you’re not expecting it and a contrast to ‘Permanating’ which is next and yes it’s time for disco dancing.  Whilst growing up Wilson’s father was the Pink Floyd/Yes fan, his mother the ABBA/Donna Summer fan and he’s taken those influences into the new album to produce a something that works on many different levels.

‘Vermillioncore’ and ‘Sleep Together’ although from different era’s almost segue together and bring the show of astonishingly diverse music to an end and a standing ovation. A short break and Steven Wilson starts the encore with the solo ‘Even Less’ (making good on his promise to sound like Billy Bragg in the process!) which he tells us he’s playing this tour because it was so often requested on the last tour. Just don’t ask for ‘Man of Wood’ because it’s not going to happen.

The ‘Sound of Muzak’ from his Porcupine Tree era follows and if you’re expecting the show to end with a crowd pleasing bang then you’re going to be disappointed as what follows is ‘The Raven That Refused To Sing’. A cheerful song about isolation, loneliness and mortality, visually reinforced by the bleak film projected behind the band. And yet it works. The subject matter is something many have to face but the music is truly sublime and brings the show to a close with the whole of the Symphony Hall on its feet. The band take the applause before walking off to leave the Steven Wilson centre stage on his own.

Prog? Yes. But so much more. As someone who gets jaded seeing a lot of gigs, this was truly an exceptional show.