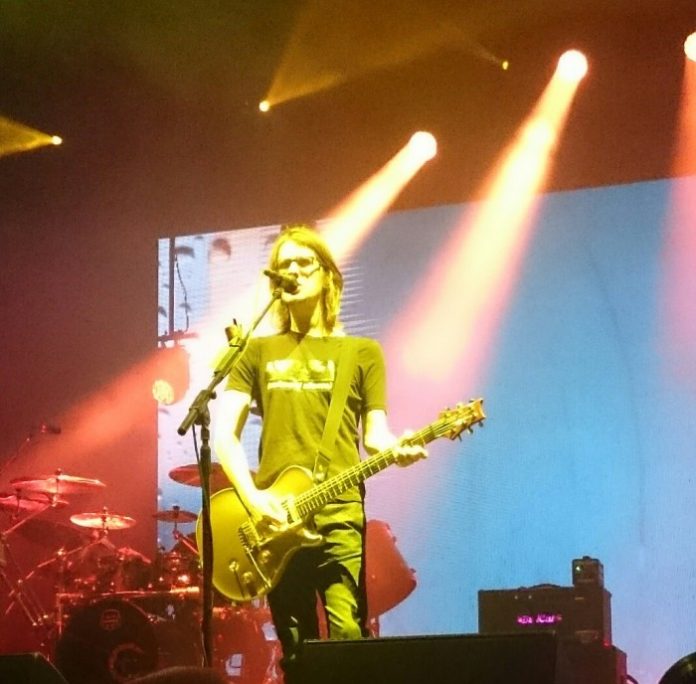 Spending a blustery Friday teatime heading north on the M6 would not be top of my list in things to do……unless that is it ends up with a visit to see Steven Wilson at one of my favourite venues the wonderful Manchester Apollo.

Any show from Mr Wilson is an event rather than a concert and tonight is no exception, the evening starts with the usual ten minute film intro before the band saunter on stage to treat us to the first part of tonight’s extravaganza…..on the menu this evening for our starter is the whole of the 2015 Prog Rock Awards album of the year ‘Hand Cannot Erase’
Is doesn’t matter how many times you hear this album, whether it’s in the car, at home or delivered from the stage it’s a staggering piece of work…..so many moments of utter brilliance during the sixty plus minutes of the first half of the show.
It’s a slightly different line up to the one that played back in the UK last March…..Nick Beggs & Adam Holzman are still in attendance and magnificent as ever but the guitar and drum department this time round are filled by Dave Kilminster & Craig Blundell respectively and my word they are worthy replacements for Messrs Govan & Minneman.
After a short interval the band are back for the main course with a selection of new-ish, old and reworked tracks…..we are treated to Porcupine Tree songs ‘Dark Matter’ & ‘Open Car’ which are lapped up by a mostly appreciative crowd (the guy in front of me never applauded once the whole evening and looked so uninterested you really have to wonder why he bothered leaving his house), songs from the New EP 4 1/2 ‘My Book Of Regrets’ ‘Don’t Hate Me’ and the stunning instrumental ‘Vermillioncore’ follow along with a David Bowie dedicated ‘Lazarus’ before the set closing ‘Sleep Together’.
The encore tonight or dessert section to carry on this menu format in Manchester was just incredible…..Steven chatted about how the European audiences react differently to songs that we do over here in blighty…..apparently the German crowds don’t favour a sing along (each to their own I suppose, the guy in front wouldn’t have sung along if his life depended on it anyway) but he was confident we wouldn’t let him down…..and we didn’t…..especially when the track in question is the phenomenal ‘The Sound Of Muzak’……just brilliant!!!!
That just left one more song…..and what a song, the show closer tonight was the mind blowing ‘The Raven That Refused To Sing’ complete with sinister animation behind on the big screen similar to those Czechoslovakian animated films of the 70s which left us wondering what the hell was going on…..but It suited the mood of the track beautifully, what a way to close a show!!!
Each Steven Wilson show is a real masterclass from the Prog Meister General and leaves you hungry for the next tour…..personally I can’t wait and the 3000 others in the crowd….well apart from one patron felt exactly the same, a superb evening from start to finish…..well worth the sluggish drive up and the cone affected drive home.
Previous article
Amps Off For Enter Shikari
Next article
The Enid – Crescent Theatre, Birmingham – Saturday 30/01/2016