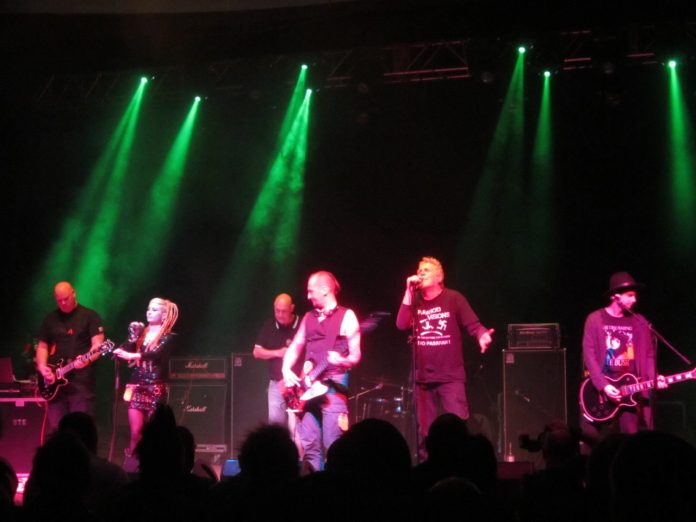 Damian loves his vision of paranoia

Truth is often stranger than fiction and as legend would have it in 1979 a thirteen-year-old punk kid called Peter in Dublin is reading the response from a letter he had sent to the biggest punk band on the planet, Crass. The letter, signed by Steve Ignorant answers questions and includes badges, leaflets and bizarrely enough, a recipe for bread. It proved to the teenager that Crass were indeed the real deal, that they are ordinary approachable and accessible.

A couple of years later himself and like-minded Crass fanatic vocalist Deko Dachau founded the now legendary and seminal punk rock band Paranoid Visions. The band also include Aoife Destruction on vocals, Danarchy on guitar, Jay Suss Christ on drums, Tomasz on bass and Steo Vision aiding and abetting with samples. Paranoid Visions became and still are the biggest punk band in Ireland and for the last couple of years have collaborated and toured with legendary frontman of Crass Steve Ignorant. The fruits of this alliance were part of the Midlands Calling event that rocked up in Wolverhampton. The band troupe on to the stage and what follows is a masterclass in the intensity that a genre of music such as punk can offer. Songs like “Big A Little A”, “Braindance”, “Join The Dots” and “All I Want” and “Charity Begins At Home” are belted out with force and hunger with Steve standing back at times to allow Aoife and Deko to front up their parts. Aoife takes the lead on the harrowing “Strange Girl” and highlights what a strong voice she has in her on right. “Hands” with it`s wonderful chorus and “Tube Disasters” become audience participation pieces with the faithful singing along. We get “Do They Owe Us A Living?” a song that was written for Crass`s `The Feeding of the 5000` album when Steve was nineteen.

“When Anger Turns to Rage”, “Rock and Roll Revolution” and “So What” are shared and you can almost taste the passion watching how pumped up Mr Ignorant gets during the presentation of these songs, A joy to behold. My favourite track, the marvellous punk / reggae anthem “War” is played before “Where is Love?” completes the set.

This was a cracking show from a partnership that has such mutual admiration and respect for each other and it really comes across in their performance. I have been wanting to catch this union for some time now and I can happily report it was worth the wait. Hopefully the next time they are offered a similar slot at such an all-day festival, they are higher up the bill as their standing certainly deserves.