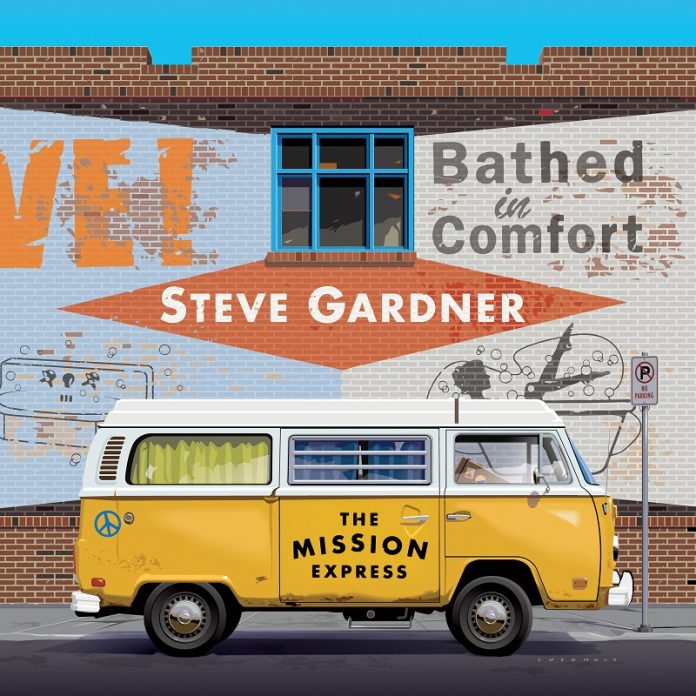 Here’s one that grew on Damian. Also, please note you don’t have to agree with him that MV is superb.

What I really love about contributing to this superb website is when you get a request that is passed to you from the Editor, such as one from Steve Gardner, a Yorkshireman, now living in Hertfordshire. The gist of his email was that he`d released an album that he`d recorded with Chuck Prophet and his band, the Mission Express and wondered if we would be interested in reviewing it. Hell Yeah!!!

Steve is an amateur musician in every sense, in that: it’s not how he makes his living and, above all, he’s in it purely for love. A couple of years ago, plucking away at a couple of songs he’d written, he started to ponder how much better they sounded in his head than in his ears. It dawned on him that if these songs were ever going to make it in the world, they needed some juice. So, to really bring them to life and to make them rock, he needed help.

The night before, he’d been to a Chuck Prophet show in London and knew that Chuck produces other artists from time to time. He despatched an email, attaching the words to a song about a faded rock star, asking Chuck if he’d be interested in helping. “I’m up for anything” came the reply, “This is the kind of meat I gobble up”. A session was planned and Steve turned up in San Francisco with a plan to record a four song EP with Chuck, co-producer Matt Winegar and Chuck’s renowned touring band, The Mission Express.

Under such tender care, the four tracks were bagged before the last afternoon of studio time was spent.

To fill the time, Chuck decided to wrestle one more song to the ground, somehow turning a whimsical, almost novelty folk song into a ferocious ‘1978 Stiff Records’ rocker. “That’s great” said Steve “but my daughter’s going to kill me. She told me before I left, “Don’t let Chuck ruin that song!” and she’s going to hate it”. “We’re making music, not friends” said stone-faced drummer, Vicente. But Chuck softened and they did a country version. After a week, Chuck pointed out, “We’ve got six tracks. We only need four more and it’s an album!”  six fresh songs and another week of early Spring in the Noe Valley and the album was put to bed,

The album kicks of with a straight up country tinged ditty called `Rosalie` which has a pleasantly infectious banjo hook line underpinning the song which is more spoken than sung. The lyrics seem a little disturbing as it`s a love song of sorts, bordering on stalking of said love interest. I really enjoyed the harmonic echo on the chorus. We the get the oddly named `The Day The Aliens Saved The World` (Rock version), It’s an amusing, quirky but well written song that at times reminded me a little of Squeeze`s “Cool For Cats” and will have you humming and singing the strap line for the rest of the day, A very infectious song that had some delightful rock out moments during and toward the end. Check out the animated video by Stephen and Zara Jane Peermohamed, it will not fail to amuse you. `I Can`t Walk Away` is a charming love song which suits Steve`s quietly shared vocals. Stephanie Finch`s harmonies on this track were a joy to behold, with the musical accompaniment underpinning it.

I really loved `I`m Gone` a number that wouldn`t have seemed out of place in a set by the late, great Johnny Cash. Superb guitar licks, harmonies, harmonica, hand clapping and lyrics about a relationship gone sour and that person trying to convince themselves that they`ll pack up and go.

`Picture Of You` is a stripped back offering with just Steve`s voice, a piano and what sounded like a violin accompaniment on this rather melancholic piece. A story of a murder committed by the narrator is shared with `Take Me Down.` The guilt and the pain are almost tangible in Steve`s vocals as he relates this, a murder ballad of sorts. Once again wonderful backing by the Mission Express and especially Stephanie`s sweet harmonies. We get another version of `The Day The Aliens Saved The World` but this time a Country format. It shouldn`t work but with these exceptional musicians it sure does. Bizarre but beautiful.

Inflections of Johann Pachelbel`s `Canon and Gigue’ open this haunting track that benefits from some superb backing vocals, some great psychedelic guitar splashes and throughout the piece a wonderful organ or keyboard. This track `What Would I Do` is rather philosophical, looking back on the opportunities the relator had but didn`t take. But the twist is that they have met their soulmate and regardless of lack of tangible achievements, they are content with how life has turned out

A kind of upbeat love song about another broken romance follows with the sixties inspired `I Forgot` a psychedelic pop song that you could imagine the band The Monkees singing and grooving to in their television series. `The Miller`s Daughter` is a spooky tale of a building by a stream that holds a secret of a disturbing past incident that occurred and now gives no peace to present occupants. This downbeat song captures all the off-kilter elements of the related story. Astrophysics is the branch of astronomy that deals with the physical properties of celestial bodies and with the interaction between matter and radiation in the interior of celestial bodies and in interstellar space. What has that got to do with anything? Well it`s a little flavour to `Peter The Astrophysicist` the penultimate track on this release about a stargazer who realises he`ll never find a life partner unless he gets his head out of the stars, literally and comes back to earth. The music sounded akin to something that Lloyd Cole and his Commotions would have shared. Very enjoyable. `The Fall Of Lance Gardino` wraps up this offering with an imaginative take on a faded rock star, The music reminded me of one of my favourite artists from yesteryear, Cathel Coughlan of Microdisney and Fatima Mansions fame. The song ends with a real rock out from the assembled crew.

I`m sure that Mr Gardner won`t mind me saying but he won`t win any Grammy awards for his vocal adroitness but he has managed to find the perfect band to bring the warmth and richness of his range to the best on this release. To me the Mission Express are up there with the legendary Wrecking Crew and Neil Young`s Crazy Horse in terms of talent and ability and if this is the only release that this Yorkshireman ever puts out he can be proud that he managed to persuade such marvellous artists to support him to fulfil his dream.

“Bathed In Comfort” is indeed a varied and interesting offering and it certainly left me with a warm glow inside. A wonderful offering.

Previous article
BAND OF THE DAY: HIGHVIEW
Next article
A Live Vintage