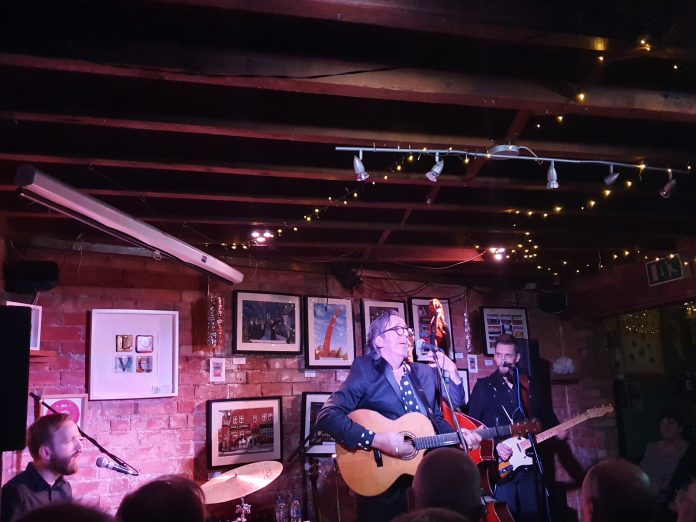 “You’ll have to imagine this with a big rock n roll band”, smiles Liam Jordan. “We’ve got a seven piece band back home…..” “Home” is Penzance, so it’s kind of understandable that they have stayed in Cornwall. What Jordan does for the first of his three shows with Stephen Fearing is proof of my long held belief that a great song translates to the acoustic style anyway. “Tap On My Window” from his debut album, out a couple of years ago, is a perfect example of that, while the more countrified “Movin’ On To Better Things” – the last track on that one – shows a different side to him. “Brass And Mirrors” is one of the highlights of his entertaining set, and the new song he plays (“I like to test myself…” he says) “Dark Side Of The Street” rather suggests that album number two will be one to seek out. Just a fan of music  clearly, given that he plays John Mellencamp’s “Longest Days” for no other reason than “I am obsessed with this at the moment”, but Liam Jordan obviously has the talent to strike out of the pack – and who knows, maybe he’ll be able to bring his band next time. 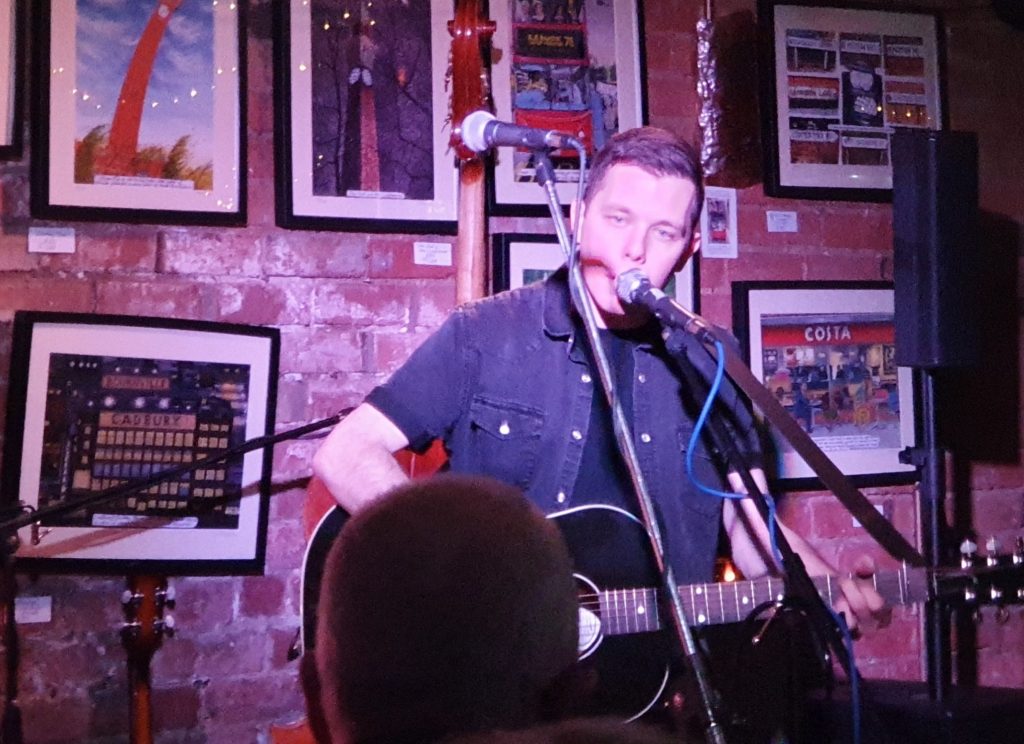 Stephen Fearing has a problem. He’s got a, as he puts it, “throat thing”. Last night’s gig was cancelled because of it and sitting where I was, just below the stairs to the dressing rooms, I could hear the extensive warm-up he does to his vocal chords here.

Clearly a man who lives on the road the way Fearing does wouldn’t want to not play the show (not least because, as he says himself, “its how I pay my mortgage”), but tonight is special, given its the first show in England with The Sentimentals. MC Hansen’s fine Danish self proclaimed “princes of darkness” (that’s Lars Ulrich, or some Death Metal band really, but we’ll let them have it) are the backing band for this thing.

Under the circumstances, what follows is a genuine triumph.

“As The Crow Flies” and “The Big East West” are from the back catalogue, and have been at most shows on this tour, but they make sense tonight given that what we are getting is as Fearing jokes “the spoken word” versions.

He’s just released a wonderful new record “The Unconquerable Past” and “Gold On The River” from it will probably sound way, way better when his throat is up to speed, but the rock n roll of “Christine” (about his wife), “Sunny” and the title track are brilliant examples of just how good a songwriter Fearing is.

And, special mention too, for “Someone Else’s Shoes”, in my opinion  the best thing on “…Past”, it sums up everything I feel about the world in 2020, and as a consequence is a shining example of music’s continued ability to reflect its society.

Fearing backs The Sentimentals for a lovely “Mother Tongue” and the last record’s title track “Every Soul A Sailor” is somehow calming and peaceful. And there’s an encore of rare skill.

“Emigrant Song” – one he originally performed with Andy White – shows the nostalgia for a homeland from the viewpoint of someone who nonetheless was glad to leave, before “No Country” ends the gig, just like it does the new album.

Even a sore throat and the odd missed note can’t hide the fact that Stephen Fearing is one of the very best – and most original – singer/songwriters around, and with this superb band complimenting him this time, that is only underlined.

He is a fabulous storyteller too. Here he recalls coming to the UK for the first time 30 odd years ago, and playing a folk club in the North. He was introduced thus: “Now,” he says in a passable Yorkshire accent, “the next act is from Canadarrrrrr [emphasis on the r’s] “I didn’t book him, t’committee did.”

They probably called it character building at the time. All I know is that he’s still here, still a cut above, and any time he’s over it is a real treat to see a master at work.