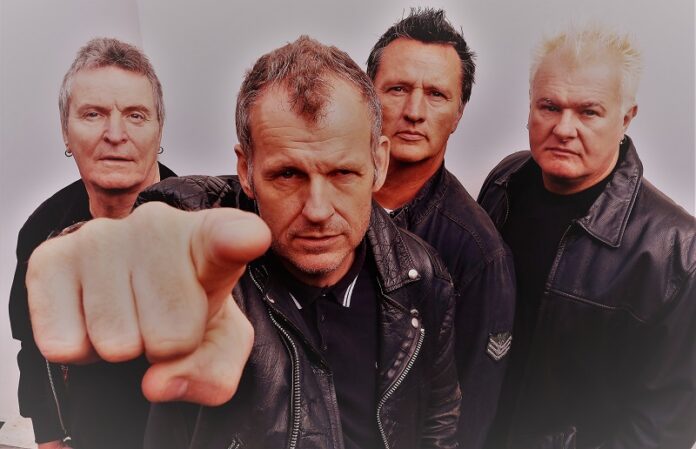 In March 2023 Eddie and the Hot Rods unleash their first studio album in 16 years via US labels Renaissance Records and Outro Records.

‘Guardians Of The Legacy’ is the outstanding new album by one of the UK’s most enduring and influential bands. Twelve tracks of Punk tinged Rock’n’roll and ear worm Pop sensibilities will leave you humming track after track.

Formed back in Essex in 1975 by Barrie Masters and Steve Nicol, Eddie and the Hot Rods quickly established themselves as one of the most energetic, hard hitting live bands around. ‘Teenage Depression’ and ‘I Might Be Lying’ proved that they could cut it on record too but it was their Top 10 single ‘Do Anything You Wanna Do’, that cemented their legendary status and still features on compilations to this very day.They ushered in the UK punk rock scene and inspired a generation of teenagers to form a band.

With the arrival of the Millennium, Eddie and the Hot Rods were invited to be on the Naughty Rhythms Tour which featured Dr Feelgood , John Otway and The Hamsters, this cemented  a new fresh line up of musicians that included Simon Bowley (nephew of original drummer Steve Nicol) on drums, Ian ‘Dipster’Dean on bass, Richard Holgarth (Atilla the Stockbroker/John Otway) on guitar and original frontman Barrie Masters on vocals while Chris Taylor would join as second guitarist in 2002.

Over the years the band worked hard to establish themselves once again as one of the UK’s best live bands, heavy touring schedules saw them playing shows across Europe,  Scandinavia and USA where they rubbed shoulders with members of  Green Day and breaking new ground in Russia and Japan as well as becoming firm favourites on the festival circuit. They opened for Status Quo on their 2012 winter tour that finished with a show at London’s 02 Arena.  The band also recorded a couple of well received albums ‘Better Late Than Never’ and ‘Been There Done That’ in the mid 2000`s.

In early September 2019 it was clear that singer Barrie Masters long term health issues were making it impossible for him to carry on performing and with dates still to play opening for Stiff Little Fingers he gave the band his blessing to carry on without him and long-time bassist Ian ‘Dipster’ Dean took on vocal duties.

Sadly, Barrie Masters died a month later and the remaining members took time out to grieve.

As the weeks turned to months and the Covid 19 pandemic took hold the remaining band members were constantly reminded by fans and promoters that they had all been Eddie and the Hot Rods for over 20 years and encouraged them to keep the legacy of both the band and of Barrie alive, this got them thinking ….” could we. should we??”

During those months of Covid lock down, Chords UK bassist Mic Stoner joined in place of Ian ‘Dipster’ Dean who became the permanent lead singer.

The new songs came thick and fast as the band hit the studio for the first time in almost twenty years and a new chapter was written in the history of Eddie and the Hot Rods.  ‘Guardians Of The Legacy’ is the result of those recordings and is steeped in the history of the band, encapsulating the fire and energy that made them such an enigma back in the 70`s. ‘Guardians Of The Legacy’ certainly lives up to its name.

‘Guardians Of The Legacy’

Recorded at Has Studio, Hastings

Eddie and The Hot Rods Online: