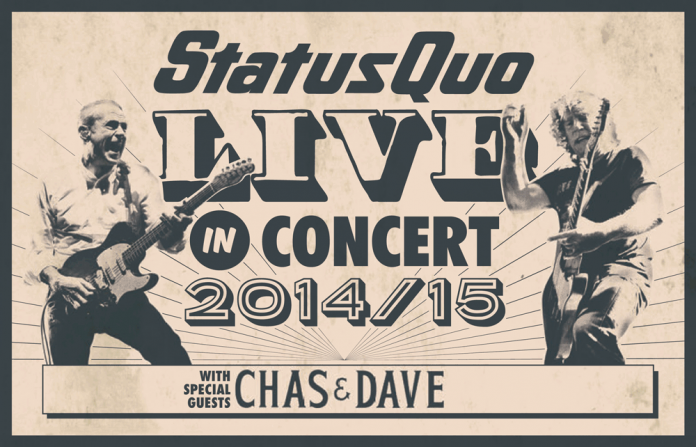 As the arena is literally shaking with people jumping up and down as “Burning Bridges” rings out as the first tune in the encore, it’s time to dispel a few myths.

Myth two: Their best days are behind them. Really? No one told these people who are having the times of the lives judging by the near hysterical reaction that some if these songs engender. Let MVM say now that when the riff to “Rockin’ All Over The World” had kicked in some 10 minutes or so before, the reception was something akin to that moment when “Doctor Doctor” kicks off to signify Iron Maiden’s imminent arrival.

Myth three and four: that Quo aren’t a rock band. That they only appeal to the bingo brigade. To deal with the first one initially, Status Quo played Download this year, so that’s that, surely. And second, yeah there’s a lot of people here tonight that wouldn’t know Monster Magnet from Mastodon but there’s also thousands more who recognise a quite simple fact: That when it comes time to draw up a list of the finest rock n roll bands to emerge from England and walk the planet, then right up there with Iron Maiden and all the others, come Status Quo.

For well over 40 years the band in their various guises have been responsible for some of the best boogie rock music ever performed. Yes, they have a signature sound, but like AC/DC it is so unmistakably theirs that it can’t be messed with.

Earlier in the year they played smaller shows in support of the reunion of the original lineup When they arrive tonight it’s back to the current personnel and thousands in an arena.

As always at these end-of-year shindigs when they start with “Caroline” it is absolutely clear that all is present and correct in Quo’s world, and for the next 100 minutes they set about entertaining everybody in the building, with plenty of the ones you know – “In The Army Now,” “Somethin’ Bout You Baby I Like,” “Roll Over Lay Down” – some of the ones you might not, and some newer material, a fantastic “End Of The Beginning,” the pick of these.

There’s the medley they always do, and an ending trio of “Down, Down,” “Whatever You Want” before the main set concludes with the John Fogerty song they were somehow born to play, and you have to like it, like it, la la la like it when they do.

Which brings us back to “Burning Bridges” which they follow with “Rock And Roll Music” and “Bye Bye Johnny” before the end.

With that they can reflect on what has been quite a year. Status Quo are in that fortunate position where they can basically dictate their own terms. Whether it’s the Frantic Four reunion shows, these Christmas gigs (mercifully there are no Christmas songs played) or next years “Aquostic” tour which sees them play unplugged, they do what they want, when they want. And they are always brilliant.