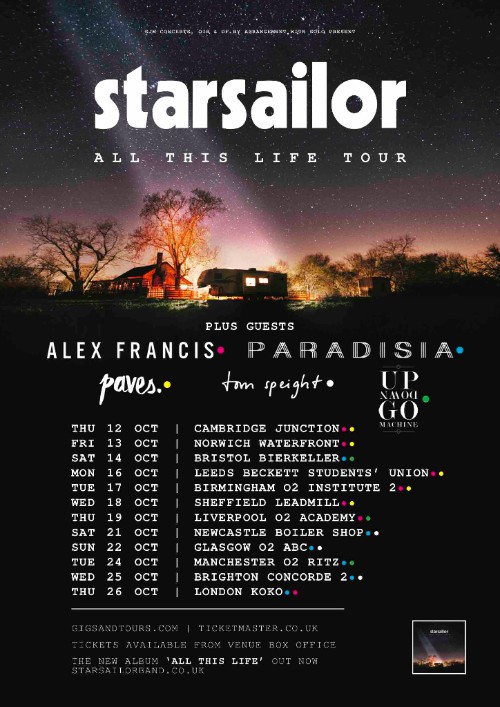 British quartet Starsailor have announced the support acts for their upcoming 12 date UK headline tour, which starts on October 12th.

Starsailor will be joined by soulful singer-songwriter Alex Francis, infectious pop trioParadisia, indie-psych rockers Paves, acoustic troubadour Tom Speight and folk troupe Up Down Go Machine. Please see tour art for details on which guest will be playing on each night.

The tour follows the release of Starsailor’s fifth studio album, All This Life, which is their first since 2009 and their highest chart placing for 12 years. The album has been greeted with rave reviews and is their 5th consecutive Top 30 studio album and sees the band re-energised and on outstanding form. MOJO described the album as a“winning fusion of powerpop, electronics and blue-eyed soul.”

The band have also released a live acoustic version of the melancholic track ‘Blood’, taken from the new album and filmed in an intimate session during the recording process.

Having already played to a packed out Big Top Stage at Isle of Wight Festival and at British Summer Time in London’s Hyde Park supporting Phil Collins and Blondie, the band are poised to take the outstanding sound of their new album on tour across the UK and Europe. See full tour dates below.

Tickets are on sale now from www.starsailorband.co.uk/tour.asp.