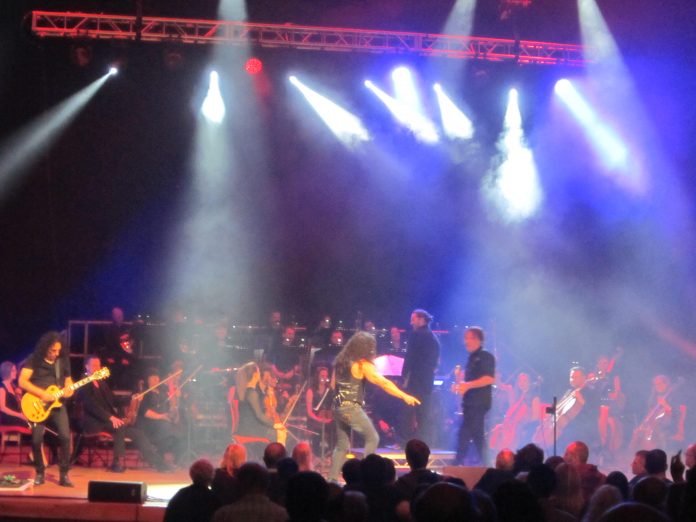 I have to admit that I really don`t like tribute bands and avoid them at all costs. I`d rather see a band that write and perform their own material, no matter how awful they are. But when I read about Stairway To Heaven: Led Zeppelin Masters, it really intrigued me. Led Zeppelin are a band whose material was ground-breaking and has certainly stood the test of time. Australia’s celebrated live concert event Stairway To Heaven: Led Zeppelin Masters has returned to the UK for ten-dates as part of their European tour, marking fifty years since the release of Led Zeppelin’s self-titled debut album and its follow-up, Led Zeppelin II. The evening is essentially the Zep Boys, a Led Zep covers band, backed by a thirty-five-piece orchestra they name The Black Dog Orchestra. The orchestra, we learn are ninety per cent Brummies’ so I can assume they have seconded a fair few from our wonderful CBSO. Tonight, was the penultimate show on this UK leg and Birmingham`s Symphony Hall was about the perfect venue to hold this showcase.

The night begins with the orchestra running through snippets of Zep numbers to give a flavour of what`s to come. The Zep boys hit the stage and head straight into `Good Times Bad Times` and `Nobody`s Fault But Mine` and i`m taken aback as to what a dynamic voice singer Vince Contarino has. On the latter song he plays harmonica and catches us all out when he stops and starts the song near the end.

I was mesmerised with the performance of the next three tracks with `Over the Hills And Far Away`, `Ramble On` which started with Vince playing an acoustic guitar and `All My Love` The orchestral arrangements actually brought out the wonderful rich textures and absolute beauty of these songs.

There`s chance to rock out with `The Song Remains the Same` before guitarist Tzan Niko picks up a double necked guitar and highlights his abilities on `Rain Song`, The hypnotic nature of `Dazed And Confused` is brought the fore before the audience are on their feet singing and dancing along to `Rock And Roll` as the first half of the show comes to an end.

Vince, Tzan and bassist Warwick Cheatle pick up acoustic guitars and sit at the front of the stage to share an incredibly emotional `Going To California` The show concludes with the masterpiece of `Stairway To Heaven`, a thumping `Heartbreaker` and the glorious `Black Dog`

I have to say any cynicism on my part was blown away after the first couple of songs this evening. The Zep boys are superb musicians and Vince Contarino has a blistering vocal range and enthralling stage presence. The addition of an orchestra brings this night a different dimension. The arrangements enhanced the depth of the songs and were delightfully executed. I have to admit I was stunned by this evenings presentation and have already dug out and dusted down my Led Zep collection to try and relive this fabulous evening.