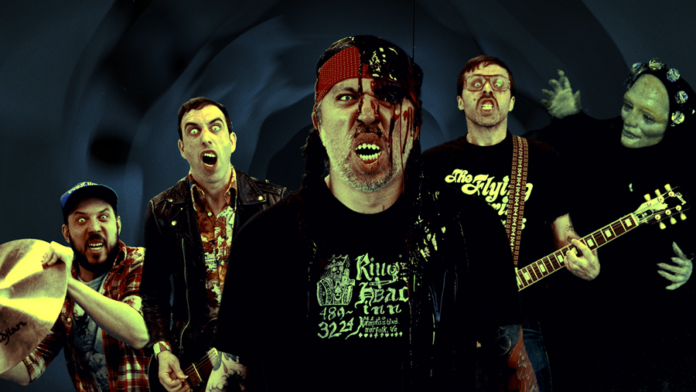 Boston legends CAVE IN make a highly anticipated return with their Relapse Records debut, Heavy Pendulum, their first full studio record in over a decade. Today, CAVE IN share the new track, “Blood Spiller” alongside a music video filmed and directed by Jordan Olds and Drew Kaufman of Two Minutes To Late Night.

Guitarist/Vocalist Stephen Brodsky comments: “If you laid out the timeline for 2020 like a recipe, it might look something like this: global pandemic + lockdowns + worldwide protests over the wrongful death of George Floyd + election year = cocktail for end times. Somewhere in that concoction, we found ingredients for a new Cave In album. “Blood Spiller” is the sound of us swallowing it, getting ripped on the horrors within, and coming down to reflect on it through song.”

Produced by Kurt Ballou at God City, Heavy Pendulum showcases everything that has long established CAVE IN as one of the best contemporary rock, hardcore, and metal bands since their monumental 1998 debut Until Your Heart Stops. From the driving tracks such as crushing opener “New Reality” to the metallic edge of “Blood Spiller”, Heavy Pendulum sees CAVE IN look back at their discography and capture their most memorable, visceral, and forward-thinking moments to create a record that is all at once familiar and in true CAVE IN fashion, ahead of the mainstream.

Heavy Pendulum is out May 20 on DLX 2xLP/2xLP/CD/CS/Digital. Physical pre-orders are available via Relapse.com AT THIS LOCATION. Digital Downloads/Streaming HERE.

FOR MORE INFORMATION ON CAVE IN, VISIT:

Previous article
BAND OF THE DAY: TRUCE
Next article
TOP OF THE POPSIDE