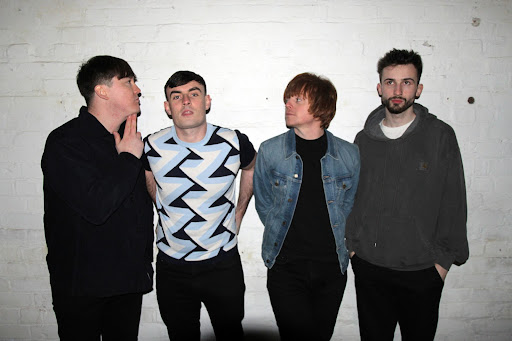 Warrington indie-rock risers – THE K’S – have unveiled their latest single “Hoping Maybe”, ahead of an extensive UK tour this March.

Storming into the No.1 position of the iTunes Alt Chart and No. 3 in the Official iTunes Chart upon its release today, the track was also premiered by music tastemakers Gigslutz.

For a band that still believes getting right up in front of people is the best way to let them know what you’re all about, The K’s have finally managed to stay still long enough to record some new music — with “Hoping Maybe” leading the charge. If 2022 was all about laying the live foundations, 2023 is all about raising the roof with new music for the band.

After a ceaseless year of headline shows, major support slots, main stage festival appearances at Reading and Leeds, Isle of Wight and Kendal Calling and a run of European dates with Mancunian stalwarts James and Liam Gallagher, the Warrington four-piece bunkered down in a studio close to their Earlestown base to record the first in a raft of new releases.

Live show favourite “Hoping Maybe” is the first in a bold five-single release schedule, set to culminate in a digital and physical album release in November.

“Out of all of the tracks I’ve written, I think “Hoping Maybe” means the most to me. It adds another level of intimacy to our live show, and there is something special in the way we connect with the crowd every single time we play it.”

Alongside the new release, The K’s are also gearing up to head out on a 12-date UK headline tour this March. A band who just can’t help themselves where live shows are concerned — it’s what they were built on after all — the live run will kick off in Glasgow on 9 March. With tickets flying and the Liverpool date already sold out, find full dates and details below.