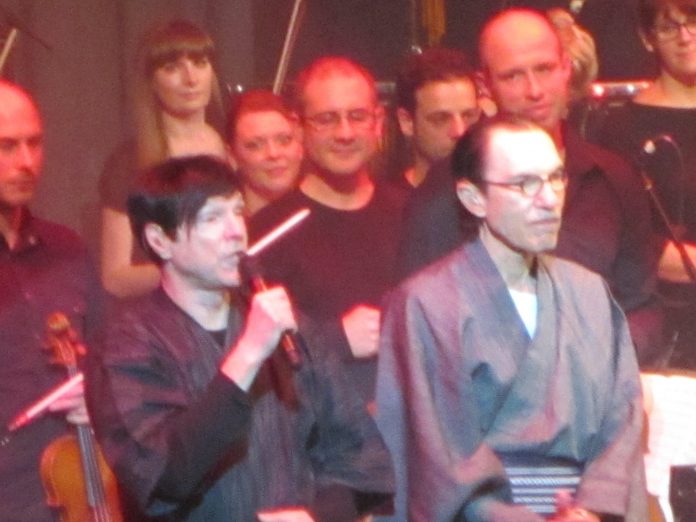 Sparks catch fire at The Barbican as Damian gets to see his favourite band up close and personal. Is the town big enough for the both of them?

I first saw Sparks just under forty years ago at the Birmingham Odeon on the Propaganda tour and have been lucky enough to see them at numerous venues across the country since then.

What I love about this band is that they are never afraid to try something different and this evening is no exception. The show tonight will be a 40th
anniversary performance of their third album Kimono My House accompanied by a 38 player configuration of the Heritage Orchestra

The lights dim and the opening bars to probably their biggest hit “This Town Ain’t Big Enough for Both of us” rings out with the brothers Mael arriving onstage dressed in nothing less than kimonos!

Over the course of the set, this most strange of bands take twists and turns through songs about narcissism, suicide pacts gone wrong (the brilliant t “Here In Heaven” and Albert Einstein (“Talent Is An Asset”) before their festive classic “Thank God It’s Not Christmas.” Take that Slade….

“Equator”,a song which uses Russell’s falsetto voice to the full, closes the first halfof the show. Russell gives a special mention to the guys who played on the original album, Martin Gordon, Adrian Fisher and Norman “Dinky” Diamond, along it’s with producer Mervyn “Muff” Winwood.

After a short break and the performance restarts with “The Rhythm Thief”, a big band version of “Get In The Swing”, before a forty’s swing style version of “Looks, Looks, Looks” is shared. “Pulling Rabbits out of a Hat” follows before Ron steps up from the keyboard to give us a rendition of “I am Ingmar Bergman (excerpt)”. “Oh my God”,
“Dick Around” and “When Do I Get to Sing My Way?” are next before the show closes with “Number One Song in Heaven” with 69-year-old Ron loosening his tie before a brief dad dance.

We are granted a one song encore of “Change”
before Ron and Russell take their leave and the Orchestra reprises an instrumental version of “The Number One Song in Heaven”. A superb evening, with a superb band, accompanied by a wonderful orchestra. The show will be repeated on Valentines day 2015 in Los Angeles. It promises to be a memorable night.

I only wish I could be there.