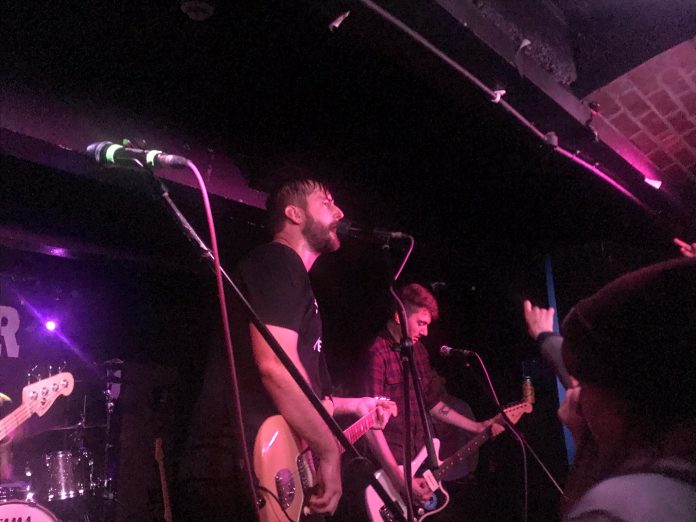 Last year I reviewed the debut EP from a Birmingham punk band called Lovebites. “Social Hell” I concluded was ace, “because it recognises there is no need for rules.” And watching them here for the first time, that’s still the case. Bass player Christian O’Reilly has a painting of The Clash on the back of his jacket, singer Jack Perry has a Police t-shirt on, and their music is somewhere between the two. “Primary Colours” is a cracker of a thing, not on the EP it shows a band that has plenty to say, and as if to prove its live, Perry has a bit of a wardrobe malfunction and needs help from a lady in the crowd to remove his jacket too. “Horizons” hits home, and “Worst Gentleman” is clearly not about the band themselves, because Lovebites have everything it takes to move them forward. 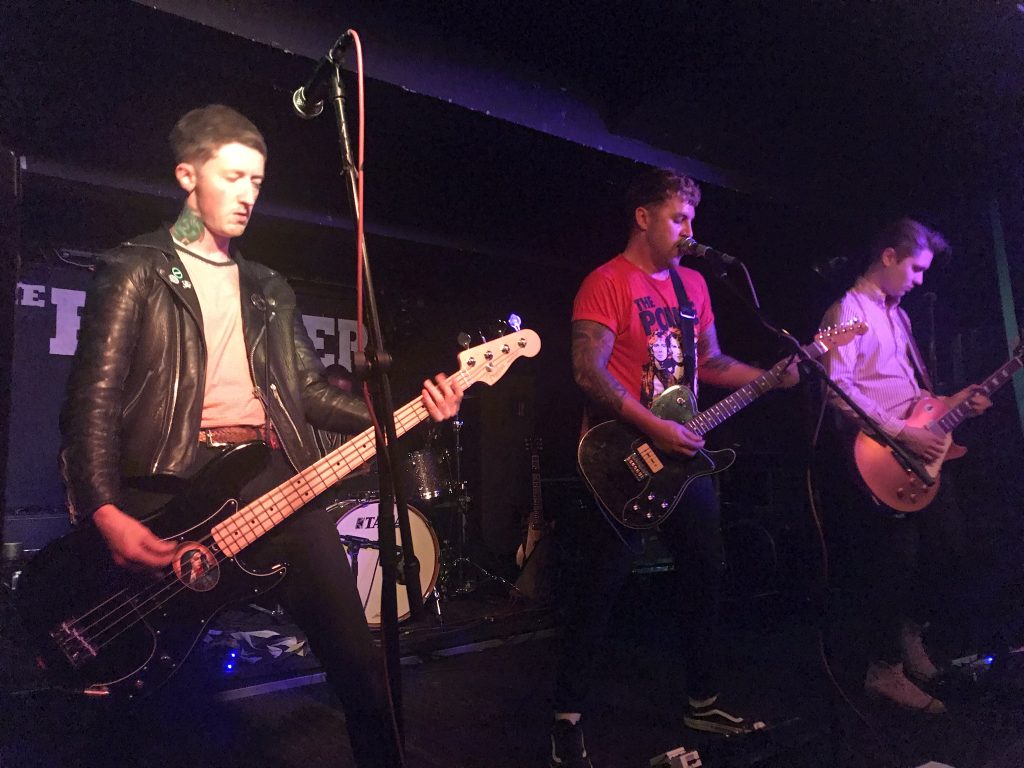 I am not sure I’ve ever seen a song started with the words: “this is about an existential crisis at 2am in the morning” but then I’ve never seen Goodbye Blue Monday before. Over the course of their half an hour, the self-proclaimed “short, miserable” Scots visit some dark places, in the name of catharsis, but manage to retain their good humour whatever the subject matter of “The Sickness, The Shame” and the likes might have. “Worst In The Morning” is particularly impressive, the message of “Exile” (that you shut yourself off when what you crave is company) is poignant. Current single “Trigger Alert” is 69 seconds of furious rage, and the anti-marriage “Love Is A Noose Made For Two” probably confirms that this is bleak, nihilistic stuff – albeit its wrapped around some proper tunes. Tellingly that one is from an EP entitled “Misery Punk Ruined My Life” which suggests Goodbye Blue Monday are fully aware. 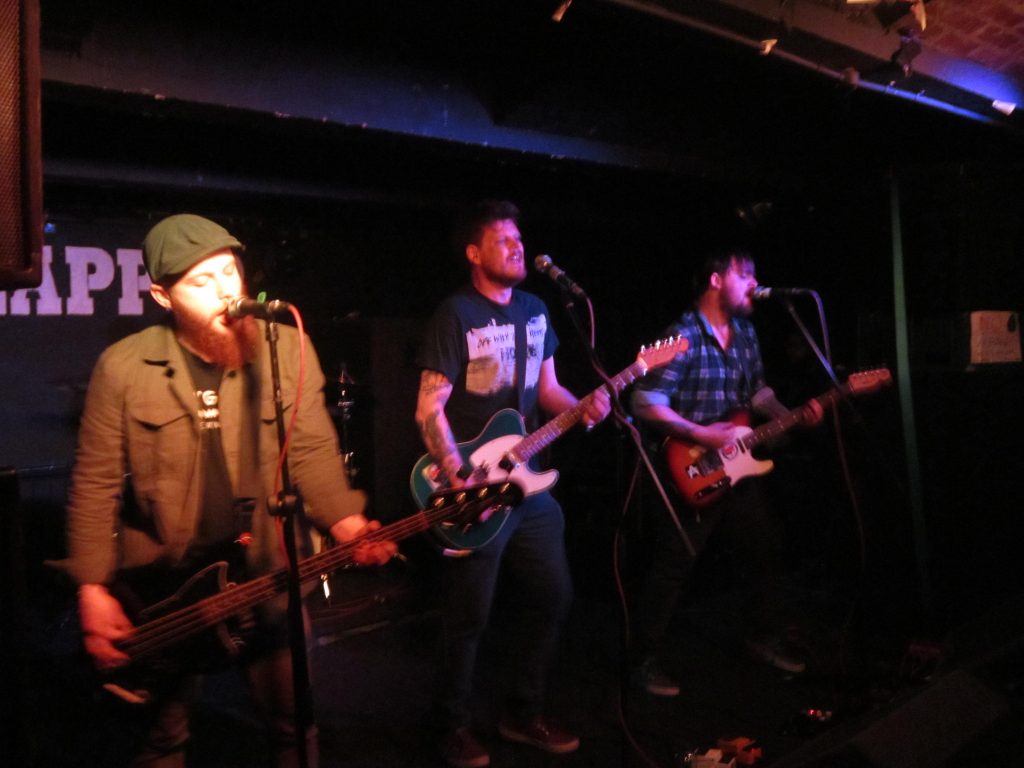 Seeing Pkew Pkew Pkew back in March, when they opened for the god-like The Hold Steady, if you had to come up with a one-word review for them, you’d have said: “energy”. Seeing them here, proves that’s no fluke. 30 minutes of rapid-fire stuff. Somewhere between Craig Finn’s boys and The Gaslight Anthem, with the harmony trio thing that Honeycrack were ace at, there’s little doubt that Pkew x 3 are destined for something special. Much of the set is culled from the brilliant “Optimal Lifestyles” record, “65 Nickels” is fabulous for one, “Drinking Days”, “Before We Go Out Drinking” are equally superb. “The Pit” is creepy, and the earlier ones they play, like “The Prime Minister Of Self-Defence” and “Mid-20s Skateboarder” prove they’ve always been excellent. “Asshole Pandemic” is like a flashbomb going off and as if in a puff of smoke, they’re gone. Even if they don’t play “The Polynesian” (they’d best do it next time….!) then Pkew x 3 are the discovery of the year so far, and a shining example of why when you go and see one of your favourite bands, the support is always worth checking out…… 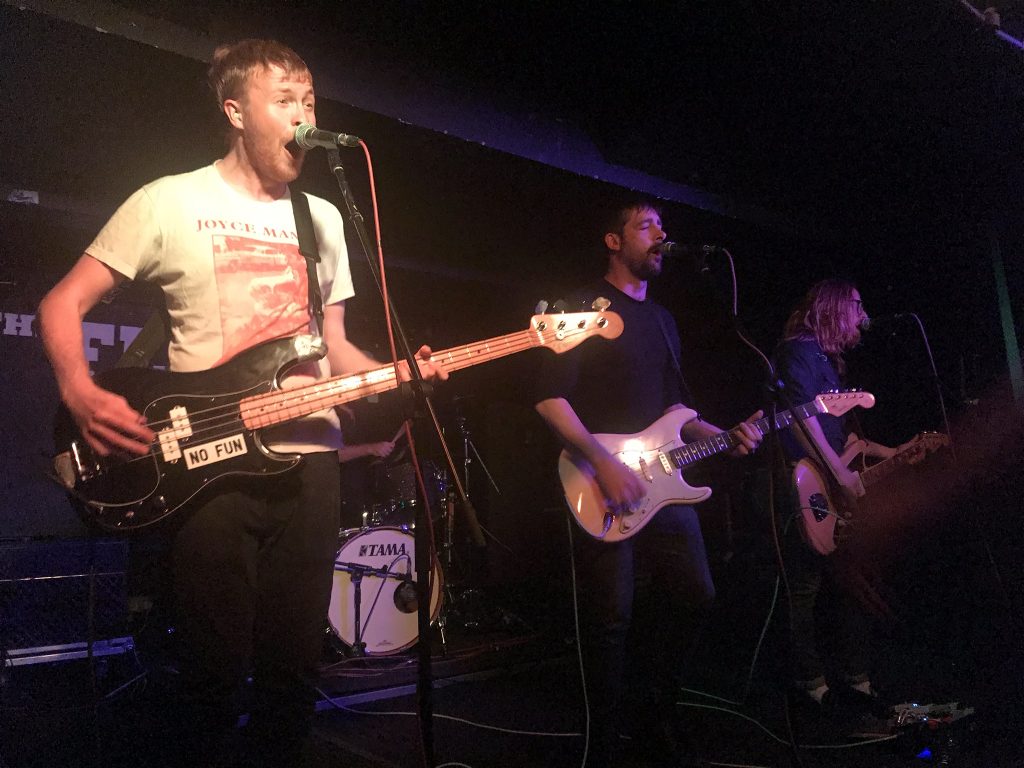 Spanish Love Songs have been racing through their set, and Birmingham has been going several shades of crazy when Dylan Slocum breaks a string. This means the frontman has to do “the frontman” and it doesn’t come easy. He adopts his best Dave Lee Roth voice: “we’ve got two more left Birmingham,” he yells, bombastically. “I hate myself….” he smiles.

SLS might have come from Los Angeles, but they aren’t rock stars.  For them, its all about the music. And that music has very clearly and absolutely resonated with their crowd. Their first time in Brum it might be, but goodness me, its wild in The Flapper.

A different sort of show to the other bands, but no less full of punk intensity. Opener “Nuevo” is a reasonable indication as to the rest of it. “The Boy Considers His Haircut” is a particular highlight, while new single “Losers” is a real visceral thing.

A key aspect of the sound is Meredith Van Woert on keyboards, which immediately sets them apart from the others on the bill, but it is interesting how it all works so well on the likes of “Otis/Carl”.

The stagedivers are out in force for Beer & Nyquil (Hold It Together), and they’re nearly joined by Slocum himself.

And if there is nothing remotely “rock star” about the rest of it, then they do permit themselves an encore, “Buffalo/Buffalo” is mighty too, and is a fitting end. There is much to be said for a band that connects with its audience and Spanish Love Songs have done that better than most ever will.