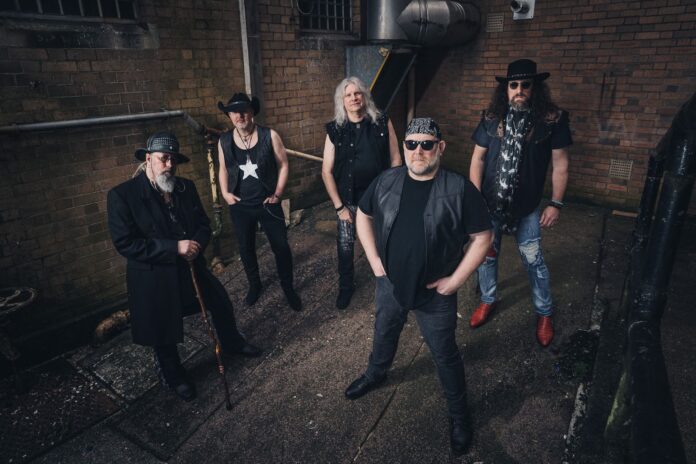 Sons of Liberty release their highly acclaimed new album ‘Aces & Eight’ in a special collector’s edition vinyl package. “It’s taken a little longer due to the backlog that everyone is experiencing, but we’re sure it’s been worth the wait!” exude the hard southern UK rock whisky soaked band, “The reception we’ve had playing the album on tour, to our singles and the whole album has been amazing, so it’s great to finally have it out for those who love their vinyl, just as we do. Hell yeah!”

Opening with ‘Ruby Starr‘ the album doesn’t so much as lay it’s cards down, it firmly slaps them down with visceral intent. An apt message for our time in ‘I Come in Peace‘ and balanced by the amusing, tongue in cheek ‘Beef Jerky Boogie‘ & ‘Whisky Is My Vaccine‘. “We had a load of fun recording this as I concealed a bottle of whiskey and glass in the recording booth and proceeded to drink it on the sly…let’s hope our Producer doesn’t read this!” laughs Rob.

The collection of songs tells stories of personal experiences mixed with historical events, creating a vivid tapestry of engagement for the listener. Groove laden rockers abound include ‘Damaged Reputation‘, which was playlisted by Planet Rock. The video was shot in the old Bridewell Police Station cells in Bristol amidst a ‘Kill The Bill’ riot with the song aired on a plethora of stations to a fantastic response – “There we are, all dressed as convicts, shooting a video, and all hell breaks loose!” chuckles Rob.

Recorded in December 2020 at Momentum Studios, with renowned UK Producer Josiah J Manning (Kris Barras Band, Moriaty, Wille and The Bandits) the result is a gritty, yet polished ride throughout. “There’s some rockers, a couple of epics, ballads, the final song selection wasn’t at all straight forward! Having Josiah involved from an early stage was a massive help – it was almost like having a new sixth member in the band!” enthuses guitarist ‘Moose‘.

Fronted by the exuberant Rob Cooksley (Vocals), a twin guitar attack in Fred Hale & Andy ‘Moose’ Muse with a powerhouse rhythm section in Mark Thomas (Bass) and Steve Byrne (Drums) – the boys are a group of well-travelled musicians drawn together by a shared love of the music of the southern states of USA and their desire to spread this with the good people of the UK; an energetic band that delivers an authentic and fresh show. This has been evident at festivals across the country including Planet Rock Rockstock, Giants of Rock, HRH Crows & Rock and Blues Custom Show amongst more. In 2022 The Sons will tour throughout the year including Planet Rock Winters End, Cornwall Rocks and a London showcase at The Black Heart. Pull up a seat at the table, pour a drink and ‘The Sons’ will deal you in…