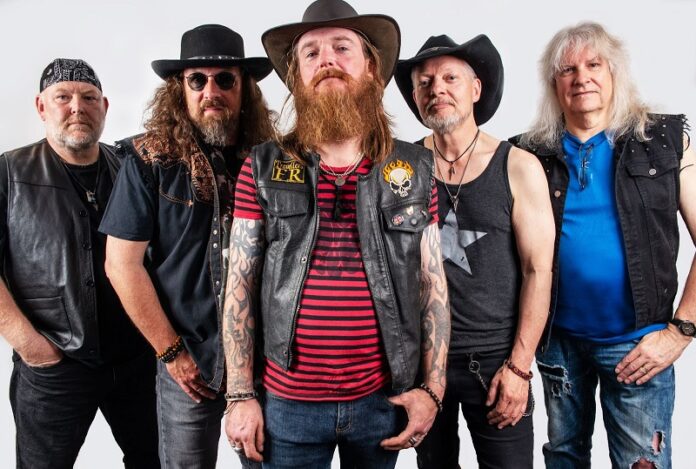 Sons of Liberty bring their own brand of whiskey laden southern good time rock as special guests to UK rock royalty FM for 3 dates in south/southwest this August including a hometown show at the legendary boat venue, Thekla Bristol.

“All of the Sons are totally made-up to be joining FM for the south west run on their Thirteen tour, which includes a home town show for us!” Guitarist Fred ‘Freddie’ Hale excitedly goes on, “We played with them at Bully-On-The-Rocks in France and they simply show why they’re always at the top of their game. We are lifelong fans of the band so you may not want to be in earshot of us in the crowd during their set, as we’ll be attempting to sing along to all of their hits!“

Sons of Liberty are a group of well-travelled musicians, having played venues all over the Uk and festivals including Planet Rock Winter’s End, Winterstorm, HRH and most recently Loverocks to outstanding ovations. They released their “tricky” second album ‘Aces & Eights‘ in 2021 to huge acclaim from critics and fans alike gaining them rave reviews across the board including; “These boys don’t just play it – they live it. 8/10” Powerplay Magazine, “Most certainly hit the jackpot” Hard Rock Hell Magazine and “Sons of Liberty keep the southern rock flag flying!” Classic Rock Magazine. This saw them being playlisted on Planet Rock and featured in Classic Rock Magazine ‘Tracks of The Week’.

Drawn together by a shared love of the incredible music of the southern states of America and their desire to deal this out with their own whiskey smoked swagger, the band of brothers are Fred Hale and Andy Muse (Guitars), Mark Thomas (Bass) and Steve Byrne (Drums) with frontman Rob Walker. The boys have proved to be an energetic band that delivers an authentic, crowd pleasing and fresh performance.