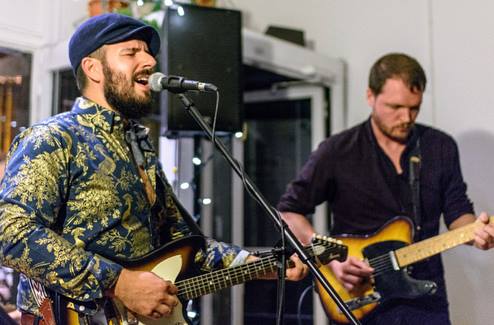 Ben Kunder is the kind of guy you pray sits next to you on a long-haul flight. Affable, erudite, and full of riveting tales about the ordinary and the extraordinary – and the intersection where they converge – Kunder is a storyteller of the highest order.

So, it’s no surprise that Better Human, the Toronto singer-songwriter’s dazzling new album and confident follow-up to 2015’s internationally acclaimed Golden, soars on vividly detailed vignettes elevated by Kunder’s warm conversational voice and, like Golden, by a small army of marquee musical guests.

Compelling themes like the birth of a child (‘Night Sky’), the struggle for life balance (‘Fight For Time’), the workaday reality propping up our outward façade (‘Hard Line’) are all fearlessly explored on Better Human, with vocal assists from luminaries Oh Susanna, Jim Guthrie, Paper Bird/Bahamas singerCarleigh Aikins plus Sarah McDougall and Ladies of the Canyon’s Maia Davies, who, respectively, co-wrote ‘Better Days’ and ‘Fight for Time’, the album’s meditative lead single.

“This record is about trying to navigate through the world while sharing darkness to see the light. It’s been cathartic for me to realize that, while I was filling my social media with pictures of my kids and stops on my last tour, I was also filled with anxiety and struggling to find time to really be joyful,”Kunder laughs. “The more I started opening up about it, the more I realized everyone was feeling the same way.”

“If we could just embrace that, then we could all just breathe it out and be present with each other.”

Diving deep into Better Human – both the album and the title song which is slated to receive an accompanying video – is an excellent way to begin that process. With its shimmering lead guitar and joyful chorus (“I’m working harder every day, to be a better human in this world, tattoo these words onto my skin”), “Better Human” is a tiny, perfect anthem for self-realization.

Elsewhere, Kunder lightens it up, as in the breezy, propulsive ‘Jessi’, buoyed equally by bloopy synth and by Kunder’s onetime Europe tour-mate Sarah McDougall, who adds backup vocals. Meanwhile, the unabashedly knock-kneed ‘Come On’, gorgeously abetted by Carleigh Aikins, is a tender reminder that love really is all you need.

Kunder spent most of 2017 assembling Better Human, beginning with the songs ‘Better Days’ and ‘Night Sky’, which were cut that spring with multi-instrumentalist/producer Aaron Goldstein at his Baldwin Street Sound in Toronto.

Writing happened throughout the year. “My first record, Golden, was a collection of songs I’d been working on for years,” Kunder says. “Now, it’s a bit more immediate. The title track was written the day I went into the studio, and ‘Come On’ I wrote halfway through the recording process. I was struggling leading up to the recording. Then I went on tour with Oh Susanna at the end of last summer and the floodgates just opened.”

“I realize it’s hard to know where to put me,” Kunder offers when asked where he’d expect to findBetter Human filed. “I just write songs and hope people relate to them. I think there are people like me who listen to albums the whole way through, to hear the arc of the story. Others want to pick out specific songs to soundtrack their lives. I’m happy with either kind of listener. I really just want to connect with as many people as I can in any way possible.”

with Carleigh Aikins on backing vocals