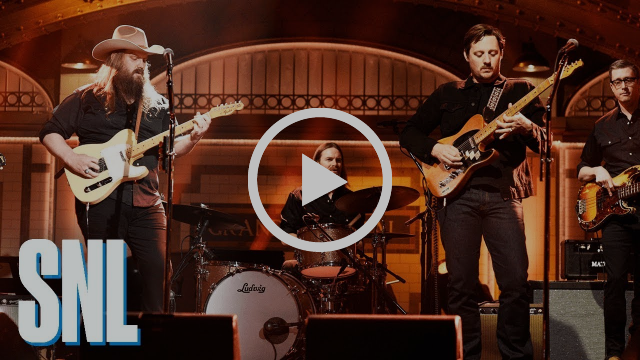 Country superstar Chris Stapleton is on course to potentially land his first UK Top 40 single, with his appearance on Justin Timberlake’s ‘Say Something’, which is one of three new entries heading for the top of this week’s UK Official Singles Chart.

Chris recently joined Justin Timberlake on his new song, with their collaboration following their famous performance of Chris’ version of George Jones’ ‘Tennessee Whiskey’ and Justin Timberlake’s ‘Drink You Away’ at the 2015 CMA awards, which helped launch Chris into the music stratosphere. The striking one-take music video/short film directed by Arturo Perez Jr, sees Chris join Justin towards the middle of the video, it was an instant hit with Rolling Stone describing it as “stunning”. Watch it here now:

Chris Stapleton also scored a hat trick at the 60th Annual Grammy Awards this week, winning all three nominations including, Best Country Solo Performance for ‘Either Way’, Best Country Song for ‘Broken Halos’ and Best Country Album for his critically acclaimed, From A Room: Vol. 1. Chris paid tribute to the late Tom Petty with a performance alongside Emmylou Harris, performing a acoustic duet of Petty’s 1994 song “Wildflowers.” Their performance was followed by a video tribute to other musicians who died last year, including Chris Cornell, Chuck Berry, Fats Domino, Chester Bennington and more. Check out a clip of their performance here

Chris also return to the stage of “Saturday Night Live”, with his second appearance as a musical guest on SNL, alongside comedy legend Will Ferrell, celebrating the release of his latest album, From A Room: Volume 2, which is out now on Mercury Records Nashville/Decca purchase digitally and with exclusive limited-edition bundles. ) Chris was joined by fellow country star Sturgill Simpson, performing tracks including ‘Hard Living’ – watch here.
Chris’s Grammy success follows a jam packed 2017 schedule, celebrating the release of his critically acclaimed From A Room: Volume 2, that also saw him perform “Millionaire” on “The Ellen DeGeneres Show“, which you can watch here. Stapleton also performed “Millionaire” and an exclusive web version of “Nobody’s Lovely Tonight” on Jimmy Kimmel Live, also joined guest host Chris Pratt for a hilarious special duet of ‘”(I’ve Had) The Time of My Life” as well as an interview, where they celebrated with a glass of Tennessee Whiskey and chatted about Chris success including his  three nominations for the 60th Annual Grammy Awards USA for his critically acclaimed album, From A Room: Vol. 1. Stapleton also chatted to Joe Rogan for his podcast, discussing his road to success.

His album From A Room: Volume 2 has received widespread acclaim.