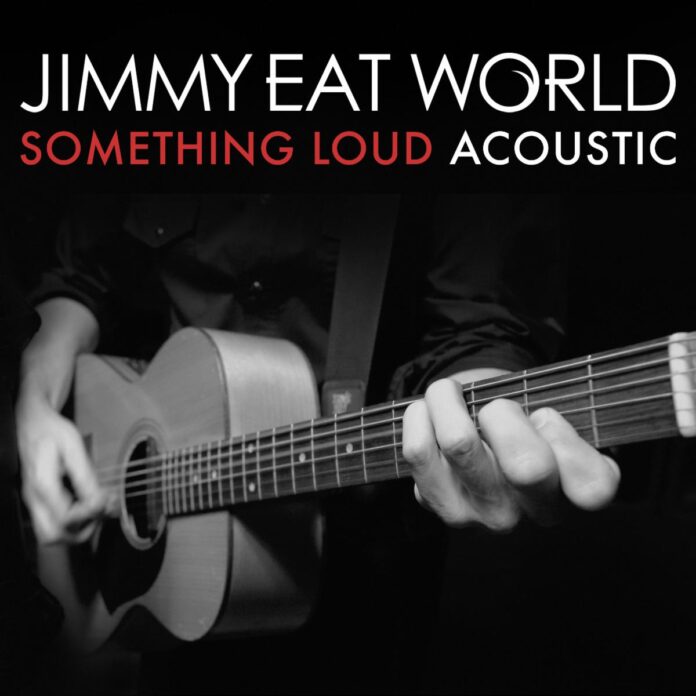 As their anthemic single Something Loud continues to gain momentum on streaming platforms and radio across America, Jimmy Eat World have released an intimate acoustic-driven version of the song and a companion video, available now digitally. (LISTEN/WATCH)

The song’s reflective nature is magnified sonically and visually in the acoustic rendition.

“We thought it would be fun to make a stripped-down, alt version of ‘Something Loud’ along with some kind of video element,” says Jim Adkins. “As we recorded parts, we filmed it. So what you’re watching is what you’re hearing.”

While Adkins and bandmates Tom Linton, Rick Burch and Zach Lind were considering what a mellow version of “Something Loud” could be, “the typical thing happened where ideas spawn ideas,” Adkins says. “Quickly, it grew bigger than just dude-with-an-acoustic and some minimal support.”

And by bigger, Adkins also means broader in terms of respective contributions. In addition to guitar and vocals, Adkins also shares drum duties with Lind, who adds tambourine, a gong and xylophone. Burch plays bass, Linton handles acoustic and electric guitar responsibilities with Adkins, and everyone chips in beautifully on backing and gang vocals.

To connect the acoustic version of “Something Loud” with its predecessor, Jimmy Eat World filmed everything themselves in one day at their studio in Tempe, Arizona. Their back-to-basics method parallels the rock version, but it’s scaled back to reflect a more minimal-sounding approach, while keeping that simple, close-knit live performance.

Keeping with that DIY ethos —and fueled in part by the pandemic — the musicians expanded their skill sets in the process. “I recorded, mixed, filmed and edited the thing — took about a week all-in,” Adkins explains. “A lot of it was hitting the spacebar to record, then running into the garage to play whatever was set up, while hitting record on my camera app on my phone to start the video recording.”

The final product is a beautifully crafted rendition of a turbo-charged track that holds its own within the band’s rich catalog.

The band is currently on the tail end of its headlining Something Loud Tour across North America. Ticket info for all shows can be found at www.jimmyeatworld.com.
JIMMY EAT WORLD 2022 TOUR DATES
^ Opener, TBD