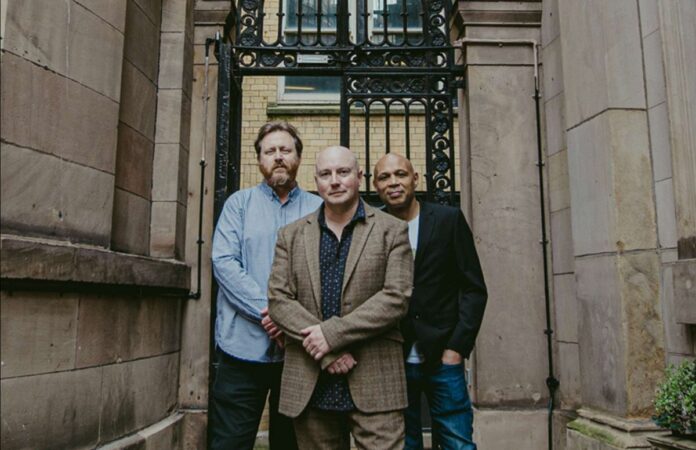 The Boo Radleys have announced details of a brand-new studio album, as well as the 30th Anniversary reissue of their lauded, landmark 1993 album, Giant Steps.  Given encouragement by the tremendous reception of last year’s live return and first album in more than two decades, the three-piece return quickly to release Seeker, the first cut from June’s new long-player, Eight.

Marking perhaps their busiest ever year in 2023, the band makes up for lost time having been missing from the musical map since 1998 prior to reforming in 2021 and releasing their seventh album, Keep On With Falling, last March.  Keen to celebrate the past as well as the present, the announcement that Giant Steps will be reissued, the Creation Records album that, for many, cemented their legacy as one of Britain’s greatest yet unsung bands, will delight fans keen to complete their collections.

Cherished, critically acclaimed and confrontational in its genre-ambiguity, the album will re-emerge on vinyl, CD and digital formats later this year.

Announcing seven new dates, kicking off with an intimate warm-up at Reading’s South Street Arts Centre on Tue 13 June, with more in the pipeline including summer festivals, The Boo Radleys will play the majority of the legendary album live for the very first time.

Bringing their story to the now, The Boo Radleys new single, Seeker, introduces the band’s eighth album, set for release on Fri 9 June 2023 on the band’s own Boostr label. Where last year’s album, joyful in tone yet brooding with heavyweight lyrical themes, came together as an exploration of the isolated ideas of each member, Eight is, according to vocalist and co-songwriter, Sice formed of songs recorded “purposefully to appear together on an album.” Before adding, “There is also a greater depth of integration, which means that it’s more difficult to tell which member of the band the song originated with.”

Reflecting on Seeker, the new album’s opening track, written about leaning on those we trust to share life’s highs and lows, bassist and co-songwriter,Tim Brown says: “This song started out as a three-chord synth pop tune and mutated into a brassy bop courtesy of trumpeter, Nick Etwell. The electric guitar flourishes were added by Louis Smith before Sice added layers of backing vocals which help drive the song along and bring it to its joyful conclusion.“

Having performed live for the first time since 1997 on two successful tours in 2022, performing both the songs from Keep On With Falling and their greatest hits, The Boo Radleys promise the same sense of celebration and breadth of classic tracks this time around, confirming the first Giant Steps Tour 2023 dates as follows:

Tickets for all dates are on-sale now with links available at https://www.thebooradleys.com