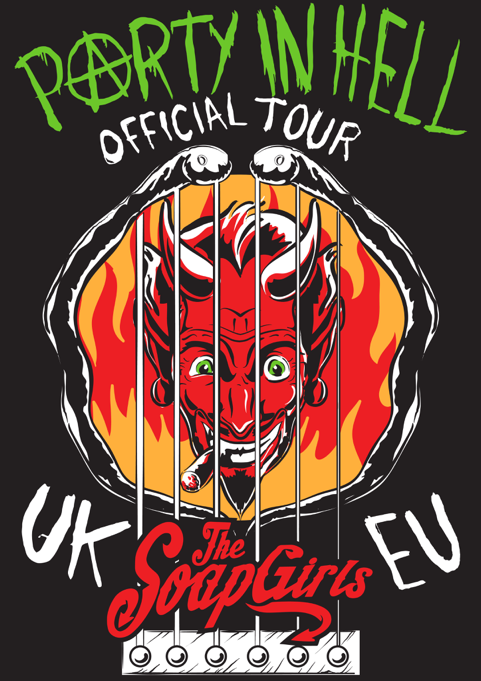 The SoapGirls proudly announce the Party in Hell tour, which sees the band bring their unique brand of ‘Revolt Rock’ to venues across the UK, including The Camden Rocks Festival on June 3rd at The Black heart at 5pm and The Rebellion Festival in August.
“Society is already living in hell, they are taxed to death, becoming more constrained with government policies, senseless murders, terror attacks and the pc brigade.  So, we aim to bring the space where people are reminded that there is place for individual freedom, where the common ground is to let go, embrace the silly and forget the stresses of whats become a living hell for most. People need to make the most of what they have and not wait to die before living, one life, hell or not lets Party.
This tour we are pushing the message of standing up and not to be silenced out of fear of being rejected. In many ways we all have a reject side to us that we keep hidden in order to fit it, so we hope to encourage all who come to the shows to embrace that hidden reject and their individuality. If you are coming to a show for the first time be forewarned, there are little if any boundaries.   You might find our shows a little like that medicine your grandma tried to shove down your throat only to find that it wasn’t as distasteful as you’d imagined and you can’t wait for the next dose. We pretty much don’t really plan the shows too much as it’s as much about the crowd and the venue as it is about what does or doesn’t happen on stage. We love that every show is individual and some are themed, so, if you find yourself in a crowd dressed in nothing but waste and body stockings you know you are in for one helluva night, p.s. the music rocks just saying. See you there fellow Reject! love” Mille and Mie
The SoapGirls soon to be released new album Societys Rejects will be one of the most talked about releases of 2017 and will feature both Bad Bitch and Rather Be Dead , with 13 more songs of Revolt Rock.
The SoapGirls are on a highway to hell and they want you to join them to Party In Hell.
The SoapGirls Party In Hell UK dates
May
Sat 27th  Nice n Sleazy Morecambe
Wed 31th Rebellion Bar  Manchester
June
Fri  2nd   Iron Road Eversham
Sat 3rd  Camden Rocks Festival  on stage 5pm @ The Blackheart
Fri  9th  Underground  Bradford
Sat 10 The Tree Horses Bradford On Avon, Wiltshire
Sun 11th  Bohemian Lounge Stalybridge
Sat 17th The Face Bar Reading
The 22nd Hard Rock Cafe Live Room Glasgow
Fri 23rd Wildfire Festival
Sat 24th Gourock Bar
Wed 28th The Thunderbolt Bristol
Fri 30th The Doghouse Nottingham
July
Sat 1st  Only Anarchists Are Pretty Grimsby Yardbirds
Fri 7th  Festival Vic Bikers Club Coalville
Sat 8th  Dares Bar   Birmingham
Sun 9th  Sixfields Rock festival Rock and Bike
Fri14th  Rock And Bike
Sat 15th  Gunners Pub London
Fri 21 st Surya  London
Sat 22nd The Shed  Leicester
Sun 23th The Kingbilly Rock Bar Northampton
Thur 27th Arches  Coventry
Fri 28th Rigger  Stoke On Trent
Sat 29th Giffard Arms  Wolverhampton
August
Tues 1st  Fulford Arms  York
Thur 3rd  Rebellion Festival
Fri 4th Rebellion Festival / After show
Sat 5th The Venue  Selby
The SoapGirls Ireland dates
August
Fri 11th  Fibbers  Ireland
Sun 13th  Stags head  Dundalk
Thur 17th Hagans Bar & Bar Bella  Dungannon
Sat 19th Bogans Bar  Omagh
Tickets available from wwwthesoapgirls.com