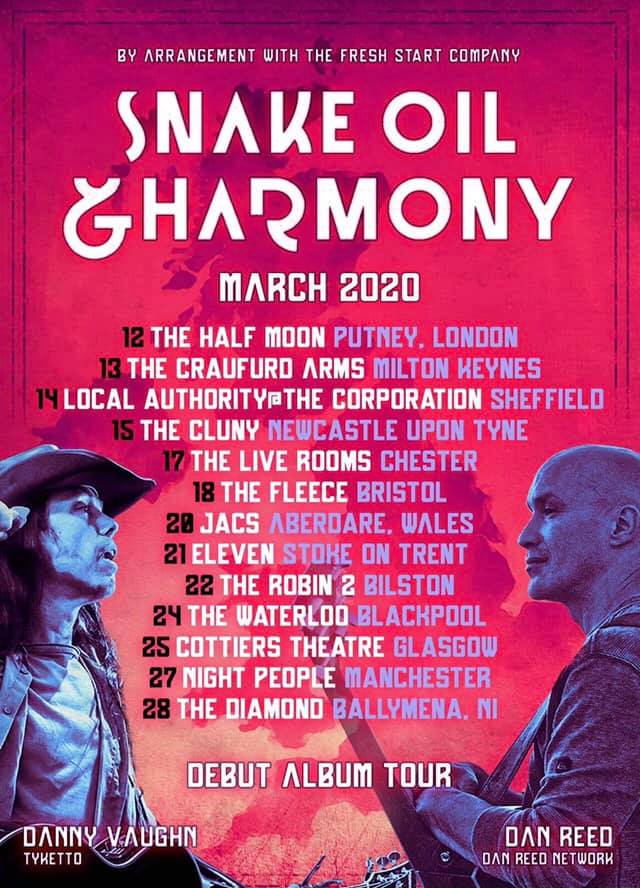 The project led to two acclaimed tours, where they shared their songs and the stories behind them with audiences throughout Europe, building a rep for their singing, musicianship and spellbinding rapport with their audiences.
The tours sparked the pair into further creative partnership, kindling their considerable talents to create new, original songs, which they added to their repertoire on tour. Now, Snake Oil & Harmony are releasing their debut album, Hurricane Riders – Friday 28 Feb, 2020 on Zero One Entertainment, to coincide with their next tour, which begins in March 2020.

“I first met Dan Reed at the Download Festival in 2014 and felt an immediate affinity,” says Danny Vaughn, “Similar to myself, he has built a reputation as a strong acoustic performer. That prompted me to ask him if he would be interested in doing a tour together. We started planning right there backstage. We named the project ‘Snake Oil & Harmony’ and it was evident from the audience’s reaction to the very first show that we were on to something special.”

Likewise Dan Reed recalls their first encounter at Download, “We were sharing the same stage. Tyketto was on right before us and blew us away.”

“We met after our set,” he adds, “and it immediately felt like a kinship was forming from our first words together. Not long after Download, Danny reached out to me to do an acoustic tour together, and I jumped right on board.”

Danny and Dan recognised an immediate sense of kinship and chemistry. “It is not a given that, just because two people can sing, they can sing well together,” Danny Vaughn reflects, “But we were immediately creating a sound that everyone saw as special. Add to that the variety of stories, jokes and cartoon voices each of us does and you get a unique alchemy that creates a show that is never the same twice.”

Under the Snake Oil & Harmony banner, the two Dans undertook two extensive live tours and made also critically-acclaimed appearances at many festivals, plus the ‘Monsters of Rock Cruise’ in America, playing a wide variety of songs from their respective solo careers, and from their bands: The Dan Reed Network and Tyketto.

“People began to ask if we were going to try and write any songs together,” recalls Danny Vaughn, “So we wrote our first song, ‘Where The Water Goes’, and played it on our next tour to see what our audience would make of it. The reaction was overwhelming and unanimous: it was time to make an album!”

Dan Reed agrees, “After a couple really wonderful tours and receiving such positive feedback from the audiences on how our voices worked well together we decided to experiment and write a song together for the third tour we were about to embark on, to give the audience something different the third time around. I sent Danny a piece of music I had recently recorded but had no vocals. He sent it back within a very short period of time with a completely finished lyric and melody that I simply adored and flowed with the music perfectly! The scene was then set for us to keep on going.”

These steps and synergy took Snake Oil & Harmony from the live stage to the studio as well, and would lead to recording their full-length album, Hurricane Riders, in Prague (where Dan Reed now dwells), at the legendary ‘Faust Studios’.

Danny Vaughn describes their creative process in this way: “Dan took the helm on this idea and the experience of writing and recording ‘Hurricane Riders’ with him as producer and overall lightning rod has been fantastic. I think it’s the perfect blend of our differing styles and exactly what our fans are waiting to hear. I’m very excited about this new chapter in our history together and I think everyone else is going to love it too.”

Naturally, the album features Vaughn and Reed on vocals and guitars, but it also brings on board Bengt Jonasson on bass and Robert Mehmet Sinan Ikiz on the drums —  “our bad ass Swedish musical brothers” as Dan Reed calls them!

“I have been blessed to work with so many great musicians on this musical journey,” Reed goes on to say, “I really can’t wait for people to hear what Danny Vaughn and I have concocted for everyone’s listening pleasure! We strove to make an album rooted in the 70’s with a focus on storytelling and live musicianship… and feel we achieved that goal in spades!”

“I can’t wait for everyone to hear the album and looking forward to what people think and feel about this album!”

‘Hurricane Riders’ will be released Feb 28th 2020, to coincide with Snake Oil & Harmony’s next live dates. Both artists are thrilled to be taking the brand-new album they have created together out on the road, along with their respective solo material, plus classic Dan Reed Network and Tyketto songs on the bill. Snake Oil & Harmony gigs showcase the unique chemistry and kinship of two master singers, songwriters and storytellers, not to mention infectious melodies and thought-provoking lyrics.

For a limited time, you can pre-order the first Snake Oil & Harmony album at Townsend Music. Pre-orders will be taken from now until Feb 3 and all those who purchase in advance will receive their copies by Valentine’s Day!