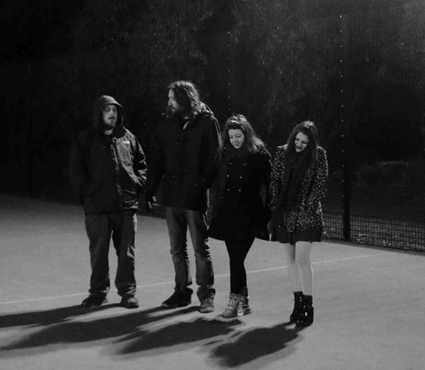 Anhedonia is Oxford doom band Undersmile’s second album, and their sixth release since forming in 2009. Never ones to repeat themselves,Undersmile have continued to evolve from their grunge-inspired debut 2010 EP A Sea of Dead Snakes, to the nightmarish doom of their debut album Narwhal, and their epic 23 minute track Titanaboa from their split with Nottingham noise-merchants Bismuth. Ever restless, they even released a split LP with their own acoustic band, Coma Wall in 2013.

Now as they prepare to play one of the world’s most prestigious heavy music festivals – Roadburn Festival 2015 – they are delighted to present Anhedonia. Composed of seven tracks, and clocking in at over 70 minutes, Anhedonia is the spiritual successor to 2012’s Narwhal, and an elegant synthesis of the band’s entire back-catalogue. But whereUndersmile once relished distortion and discord, Anhedonia finds the band experimenting with a wider sonic palette and dynamic range, utilising clean guitars and cellos as much as Skyhammer Studio’scollection of vintage amps and fuzz boxes.

As a result, Anhedonia is an album that leads you down labyrinthine paths of harmony and discord, amplification and acoustics. Recorded with a live feel in mind, Anhedonia is also the band’s most honest release, the closest they’ve come to reproducing a live sound on record.

Recorded at Skyhammer Studios by Chris Fielding (Conan, Electric Wizard) in December 2014, and mastered by James Plotkin (Khanate),Anhedonia will be released on vinyl, CD and digitally by Black Bow Records on April 1st 2015.