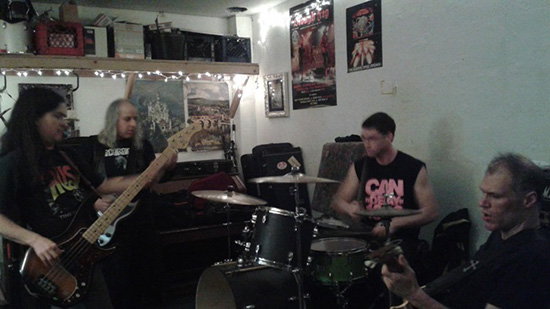 Slough Feg is proud to announce the arrival of new drummer, Addison Filipczyk. Filipczyk, 25, will have big shoes to fill following in the wake of Harry Cantwell’s departure, but after several months of rehearsal the group is confident that they are in capable hands and feet.

Bassist Adrian Maestas comments, “After trying out drummers for a few months we think we’ve found the right guy. Welcome aboard, Addison!”

Guitarist Angelo Tringali couldn’t be reached for comment, but his answering machine informed us that he was out in search of “a different lime and whiskey cola.”

Addison will make his debut with Slough Feg on April 16th, 2015, at the Eagle S.F. in San Francisco. ONWARD!!!

“Digital Resistance” was recorded with Justin Weis (who produced the album with vocalist/guitarist Mike Scalzi) at Trakworx in South San Francisco from January-October 2013 and marks the band’s first new studio album since 2010’s “The Animal Spirits.” Order your copy atmetalblade.com/sloughfeg. The album is available digitally, on CD, and on vinyl. The opaque purple vinyl with grey haze is still available in limited quantities atindiemerch.com/metalbladerecords.