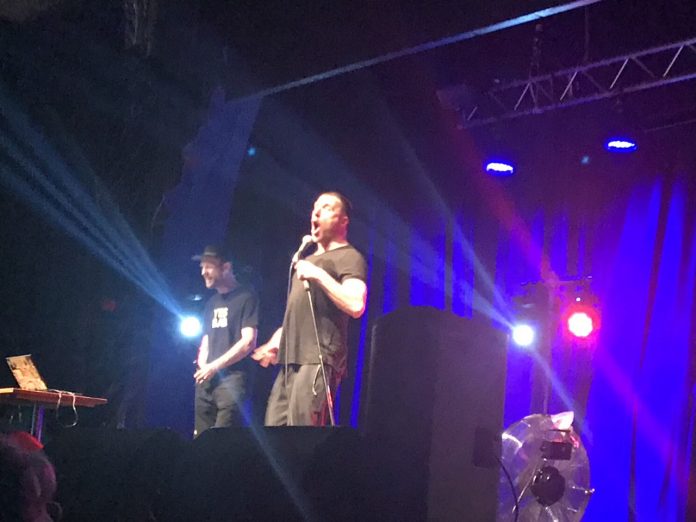 It’s not my line, but my mate is bang right.

We’d watched the two fabulous supports here. John Paul and Liines do their very disparate things – the former from the same lyrically brutal place as Sleaford Mods with a more poetic bent perhaps, and the latter do their Joy Division meets XTC style post punk, rock n roll – when my friend says: “you know this means Sleaford Mods think they’re on the top of their game, don’t you? You can tell by the opening acts. You wouldn’t book them if you thought you’d be upstaged.”

I’d seen them both the other week, for a more thorough look click here – but what I will say is that having listened to them both since, they were better tonight than they were then. Maybe they’re both finding themselves, becoming more confident perhaps, but either way, both are making the most of their opportunity.

A little later on, Jason Williamson alludes to the crest of the wave he and Andrew Fearn are on. “We played here a few years ago, we were in the downstairs room. They showed us here and said: “all this could be yours one day…….”

Recent album “Eton Alive” crashed into the top ten. That is rather like  some kids from Borstal  going to live with a posh family for one of those crap features on Channel Five. It wasn’t meant to be like that. I am certain that when they wrote “We’re going down like BHS/While the abled bodied vultures monitor and pick at us,/We’re going down and it’s no stress/I lay and hope for the knuckle dragging exodus” they weren’t thinking about stardom.

But that, really, is why Sleaford Mods are so popular. They represent their audience. In a morass of banality they are a voice of true, definitive originality.

Which is precisely why I needed to see them again. Something genuinely different takes a while to sink in, but seeing it tonight confirms what I thought last time: they use words better than any other band right now.

It is interesting, sitting closer than I was before, to see just how angry Williamson gets. Whipping up a punk rock storm, he literally spits these words. There’s a bit in “Just Like We Do” when he rounds on the critics: “The plated little words, the little zesty pit. You and your mates are experts, you get on my fucking tits” and he is red with fury as he shouts it.

The intensity of their performance is incredible. Right from “Into The Payzone” to “Discourse” over an hour later, it is relentless and it is brutally heavy, and no there’s not a guitar in sight.

There’s bile. Lots of bile. “Kebab Spider” (“who knew, they let the experts in?” is one of the great lines to condemn this awful celebrity culture vacuum we find ourselves in) while “TCR” lets out the genius insult of “Go and listen to some fucking garage punk, you pointy little tit” and you instantly know someone that they could be referring to.

The characters in these songs: The kid in “Top It Up” who “shoves it up”, there’s one of them in every office, the fella in “Big Burt” who pays “£150 a go to watch a has been who can’t play three shows in a row….”

They aren’t here. Sleaford Mods don’t care. They don’t want them either.

On “Jolly Fucker” – a quite brilliant dismantling of those that are just that, they get to the crux. “I ‘ain’t bothered where it goes, I’ve got a job. I’ll rot away in the aisles of the Co-op mate, no prob.”

And it is clear that Sleaford Mods elucidate these tales of working-class Britain in this awful decade better than anyone else does.

The encore is lengthy and as it ends with the line “there’s only one course, discourse” ringing around in a rather anthemic way, Williamson – who doesn’t talk to the crowd much, probably because the lyrics speak for him – says “thanks for spending your hard earned money on us. We’ve been Sleaford Mods”.

It’s worth it. They are right on the top of what is a very, very good game indeed.