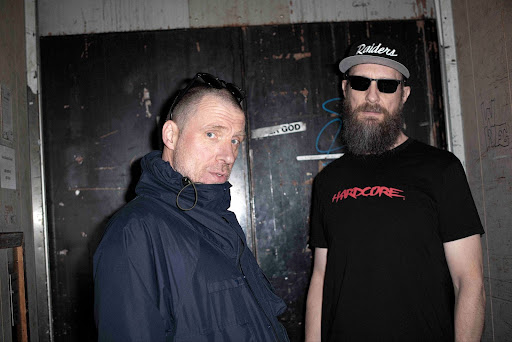 “Dirty Rat” is Orbital at their most vital, remaining utterly relevant and still pushing forward over 30 years since they broke through with their landmark single “Chime“. What began as a remix swap (Orbital did the Sleafords’ “I Don’t Rate You”) has morphed into a comic, brutal, bass-driven harangue against our rulers and the voters who put them there: the people who are “blaming everyone in hospital/blaming everyone at the bottom of the English Channel/blaming everyone who doesn’t look like a fried animal.” Jason Williamson provides a typically searing vocal over Orbital and Andrew Fearn’s kinetic, driving beats.

“This track is a giant capital letter,” explains Orbital’s Paul Hartnoll. “Like in the Book of Kells, where the very first letter always gets the big treatment from the monk when he’s doing his illustrated borders. It’s got that old school dance music vibe with bits of Cabaret Voltaire in there, even bits of The Shamen. It’s a little bit punk rock, nice and loud. A really refreshing, ‘wake up’ kind of track. And Jason is just brilliant!”

“I guess it’s about telling people to take responsibility for their own actions,” adds Phil Hartnoll. “You know, all these politicians don’t come from out of nowhere. Somebody keeps voting them in. So who might that be…?”

“The ongoing culture of non-thought mostly exists because of a lack of education into critical thought,” comments Jason Williamson. “How do you mobilise a people firmly imprisoned by a concrete system?”

The brilliant video for “Dirty Rat” was directed by Luke Losey (Smiley) and shot in Leysdown-on-Sea on The Isle Of Sheppey.

The new album is the latest in a burst of renewed post-pandemic creativity for two brothers who’ve stayed at the top of their game longer than anyone from the post-1988 Class of Acid House. Earlier this year an Orbital thirtieth anniversary package 30 Something – featuring reinterpretations of ‘Chime’, ‘Satan’, ‘Belfast’ and more by fans ranging from Jon Hopkins to ANNA to David Holmes, plus studio versions of Orbital live favourites – reintroduced Paul and Phil Hartnoll to a worldwide fanbase.