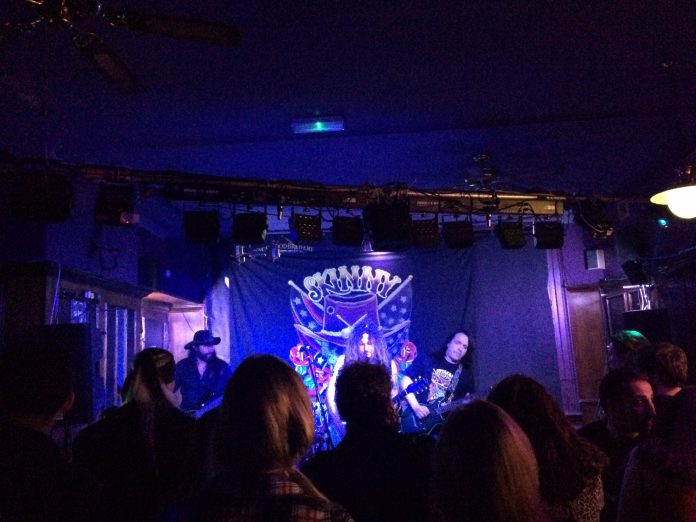 Local trio Heavy Oil and their southern tinged bluesy rock could’ve been born to perform opening duties here. The three-piece are a cut above the usual, there’s some fine solo work from Lance Perkins in “Standing In The Road” and the bluster of “Howling Rain And Thunder” is appropriate given the fact that as soon as they strike up its first note the heavens open outside for the umpteenth time today. The heaviest song they play is also the newest, “Dirty City” has a formidable groove. That’s the sort of thing that suits them best too. The riff for “Midnight Train” takes no prisoners. They end with their eponymous title song and it’s funky bass line. It brings a good, fun set to a close. Well oiled you might say.

Shall we just get this out of the way, seeing as everyone has to say it about Skinny Molly at some point? Singer Mike Estes used to be in Lynyrd Skynyrd and a couple of his usual bandmates used to be with him in Blackfoot. Oh, and they play death metal. Ok. One of those things is a lie.

The wonderful truth is simply this: Skinny Molly make exactly the sort of music you hope they would. This is southern boogie in the best kinda way y’all. “Too Much” is superb, “If You Don’t Care” is every inch their defiant anthem and “After You” is yee-haw than clenched fist, but it’s no less of a rabble rouser.

Estes is a convivial host, claiming he has forgotten to put his underwear on, his slide pick is made out of a crack pipe and one of the Lynyrd Skynyrd records he played on only had one good tune – all within the first half hour.

The four piece are comfortable with each other – even without regular guitarist Jay Johnson and with a Czech native called Paul replacing him – and the relaxed atmosphere on stage allows for a really loose feel to work like “Devil In The Bottle” (the aforementioned one good song that Skynyrd had on that record).

And if you wanted a lesson in perfect simplicity then here’s “When The Goin’ Gets Tough….The Tough Go Fishin” which is a glorious cross between the Georgia Satellites and Johnny B Goode.

Just imagine, then, what the real covers are like. The answer is pretty damn good. Although in truth Steve Earle’s “Copperhead Road”, The Stones “Dead Flowers” and Free’s “Wishing Well” are copper bottomed belters and pretty much impossible to get wrong. Skinny Molly don’t.

Then there’s the Skynyrd tunes. Look, Skynyrd are the kings of southern rock and “Call Me The Breeze” is one of their best, so playing it now is basically an open goal.

What this show – and what this band – does so well is mesh the covers with the originals. “Two Good Wheels” is the best celebration of divorce set to music (“after the third time I started to think it might be me” says Mike by way of introduction.) That he then follows it up with “Sweet Home Alabama” (you might know it?) tells you everything about this 90 minutes.

And it’s almost as if they get a second wind. Where most bands would be winding down, there’s a real energy about “Better Than I Should” and the comradeship of the turbo country of “For Y’all”. There’s life in these old dogs yet.

Tonight ends in the only way it can. “Freebird” (you might know that too?) rules in a way few songs do and it remains anyone’s signature song that wants it. And maybe, just maybe, given world events right now there’s a touch more feeling in the “oh Lord, I can’t change” refrain before the solo than usual. It certainly feels like it.

Some of the shows last week were called off when Estes lost his voice. He’s in fine form tonight despite his protestations otherwise and the cosy bar of The Iron Road deserves this. Because Skinny Molly are just about the best bar band you will ever see.