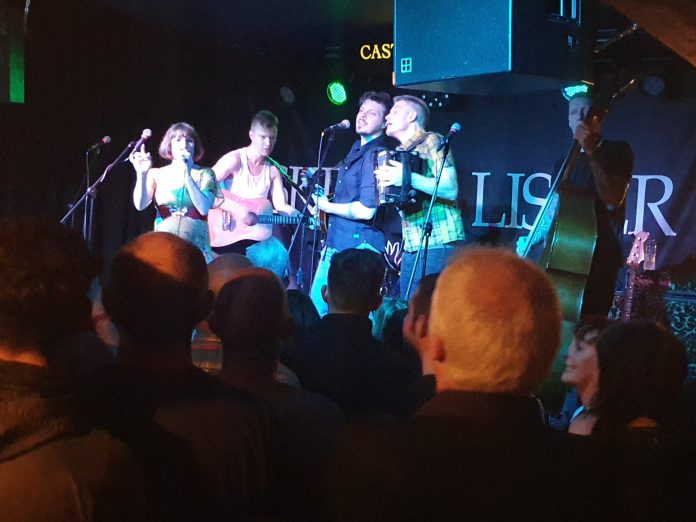 There aren’t enough (and by “enough” I mean any others that I can think of) singer/songwriters that bring their own props. That isn’t the only original thing about Nick Parker either, as his songs come from similarly left field. “Departures”, essentially about people-watching while waiting for an aeroplane is typical of his approach. All of which is explained, pretty much in “Open Letter To My Human”, a song written to him by his dog, apparently (!) telling him not to be a political singer and “leave that stuff to Bragg”. What he does do, though, is immensely entertaining. “I Guess We’ll Never Know” ramps up the audience participation by fetching a chap out of the crowd to play harmonica and producing printed lyrics for the crowd to sing- and manages to sound original. No mean feat considering it is about falling in love with someone briefly on the train. Nick Parker does it his way, and that must be applauded. Plus, as his half an hour ends with “Terry And June” it is clear that for all the quirkiness, these are songs that are exceptionally well put together. 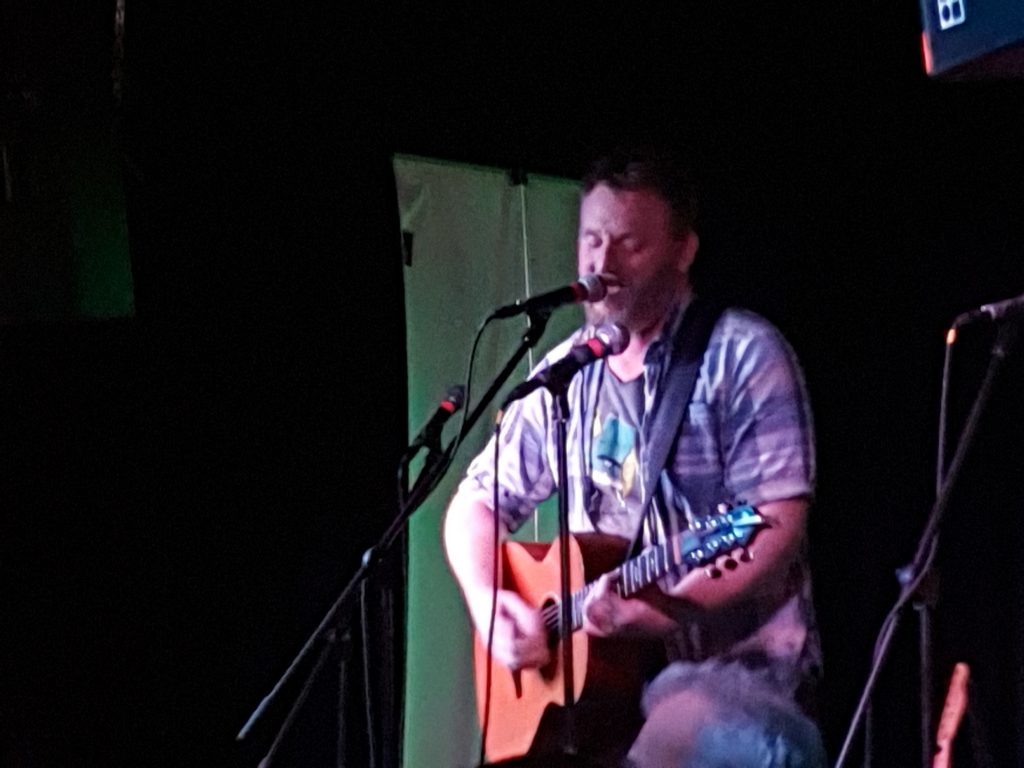 When Skinny Lister book their tours, if they’d handpicked this venue, they couldn’t have done better. Packed – they’d tweeted in the afternoon that there were seven tickets left – people bouncing, sweat running down the walls.

And that’s before they’ve played a note.

An hour and twenty minutes later, as I leave the venue, dodging the broken glass on the floor (there’s been no

hint of trouble, just it could have been people were dancing, or the merch man crowd surfed), it is obvious that you witnessed one of the great live experiences around right now.

“This is not a drill” Max Thomas had screamed before “38 Minutes” from this year’s “The Story Is….”. The veins popping out of the side of his neck. If this is folk then its folk delivered by punk rockers. And as songs whizz by, in some kind of glorious blur, then that isn’t a feeling that leaves you all night.

Lorna Thomas sings “Devil In Me”, and the bratty “My Life, My Architecture”, before a couple more from “….Is” and “Artist, Arsonist” and “Diesel Vehicle” – the latter played after a social media vote, but if it had been raucous before, then things go up a notch further when a jug of God knows what is passed around the audience in “George’s Glass”. I am teetotal, but judging by my mates face when he took his swig, this was strong stuff.

Another audience vote had seen “Any Resemblance to Actual Persons, Living or Dead, Is Purely Coincidental” picked, and the rage is palpable throughout “Bold As Brass”, and the celtic stuff to the fore in “Bonny Away”, in between this, they’d played the phenomenal “Thing Like That” and Thomas had yelled something telling: “we are all about bringing people together”, and there is a sense of togetherness here, right through “This War” and “Trouble On Oxford Street”.

And in the encore too, actually. “Stop And Breathe” is given a live debut, because it’s been requested by fans and the communal singing in “Raise A Wreck” rather underlines here, we are all in it together.

Parker and the merch man appear for “6 Whiskies” – the latter returning from whence he came via the heads of the crowd – and as it does down, there is only one conclusion to draw: never mind their records – good though they are, Skinny Lister belong on stage.

Previous article
BRAND NEW WARD
Next article
Review: The Who – WHO (2019)