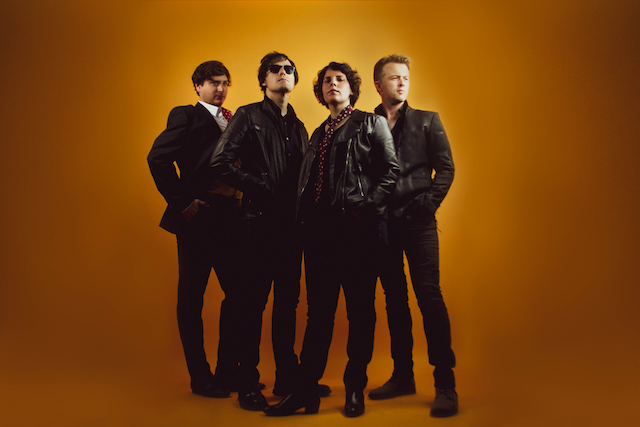 August 2, 2019
Reading time: 4 min.
Facebook
Twitter
Pinterest
WhatsApp
Linkedin
Email
Print
Telegram
Copy URL
By Andy Thorley
We’ve all had toxic people in our lives—the sort of folks who wear your soul down as you’re busy convincing yourself, no really, hanging out with them is a great time! LA rock band Aloud’s new single “Live TV” out September 6th is about the liberating moment you realize your friend is, in reality, no friend at all and you deserve better.
Henry Beguiristain and Jen de la Osa have been the soul of Aloud since they were teenagers in Miami. A shared passion for rock classics like the Beatles, Oasis, Aretha Franklin, and Otis Redding led the pair to start writing and recording their own songs. After moving to Boston together to pursue making music as a full-time career, the two fell in love, eventually marrying. Years of writing, recording, and touring fostered deep ties to the Boston rock scene, and helped them connect with other musicians as passionate as they were, including Aloud’s bassist—and the pair’s closest friend—Charles Murphy. When the band moved to Los Angeles the city provided new inspiration, new opportunities, and a new drummer in the form of Chris Jago. The band is rounded out by Alanah Ntzouras on tenor sax and Vanessa Acosta on trumpet.
Dedicated musicianship has certainly paid dividends. First on local, then national tours, the band started honing a sound that has earned comparisons to the Alabama Shakes and the Black Keys. Aloud also boasts two lead singers in de la Osa and Beguiristain who are known for their ability to harmonize and blend their voices together in a manner reminiscent of the 60s music they grew up on. LA Weekly has described their sound as “rock n roll rooted in R&B, so there are elements of Tina Turner in there, a dab of the Stones”.
Since relocating to LA the band has released a number of digital singles always with a b-side. Girl Underground Music called “Son of the Dharma” a “testament to the holy grail of rock with powerful vocals by de la Osa”. The band followed this up with this Spring’s “Children of the Divine“.
“Live TV” features Beguiristain on lead vocals with de la Osa on the b-side “Show Me What You Got”. The song features the band’s trademark vocal harmonies, horns, a phased-out catchy guitar hook, bongos, and a chorus you can imagine in a Tom Petty and the Heartbreakers song. A video for “Live TV” will premiere via Aloud’s Facebook page on September 5th. The band will celebrate the single’s release at The Bootleg Theater on September 11th with Alicia Blue, Mawd and Fiona Grey. Each advanceticket comes with a download of “Live TV” and its b-side “Show Me What You Got”.
A full-length album is being prepped for a Spring 2020 release. The album was recorded by Grammy award winner Benny Grotto (Magnetic Fields, Ben Folds, Weird Al) and mixed by Guy Massey (Paul McCartney, Ray Davies, Manic Street Preachers).
“Live TV” will be released on September 6th on Lemon Merchant Records.
LISTEN TO “LIVE TV”
“Live TV” Single Release Show
September 11, 2019
The Bootleg
2220 Beverly Blvd, Los Angeles, CA 90057
Ticket Link
Connect
Instagram
Spotify
Twitter
Facebook
www.allthingsaloud.com
Previous article
STONEWIRE FOR SOUND
Next article
DOWN THE ROAD