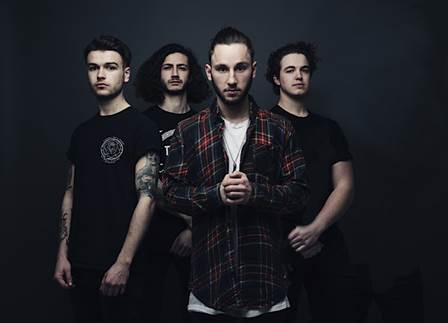 SHVPES, who have just completed work on their debut album with producers Carl Bown & Jim Pinder (While She Sleeps, Trivium, Machine Head), can now proudly reveal ‘God Warrior’ as the first new track to be made available.

The band – based in Birmingham & London – started life in the underground scene, before shifting into wider circles via guest spots with Bring Me The Horizon & Bullet For My Valentine, plus rousing sets across the UK festival circuit.

‘God Warrior’ is a breakneck statement of intent, an adrenaline-fueled indication of what to expect from this first full-length offering, due out later in 2016 via Search and Destroy / Spinefarm Records.

SHVPES vocalist, Griffin, says;-“We’re finally out of musical hibernation and so excited to start showing the world what SHVPES is really all about. There have been a lot of big changes in our camp over the past year and it’s time to re-lay the foundations. This song’s about the stupidity in following something that’s quite obviously fucking evil. Get ready for what’s coming next.”

Meanwhile, on the live front, SHVPES will play shows with Spinefarm label-mates We Came As Romans on their UK co-headline tour with Miss May I later this month.

In addition, SHVPES will perform on the ‘Fresh Blood’ stage at this year’s The Great Escape event (May 21st), whilst in June they’re confirmed for both the Camden Rocks & Download festivals.

Tickets are on sale now via all the usual outlets/platforms.

Details on the new album will be revealed in due course.