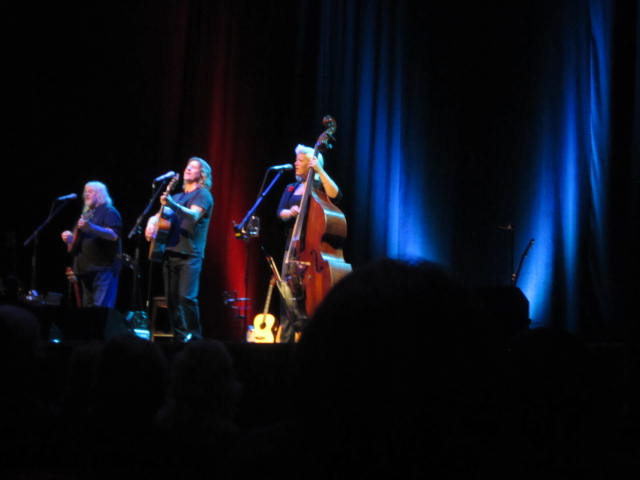 Damian gets round to seeing Brit folkies after nearly 30 years

I have been hoping to see this ensemble for some time, but every time they played, it always seemed to clash with something else I was attending. So when the tickets came on sale, I thought, if I get me one. I`ve gotta go. Hence I was quite looking forward to this show. These days the band is no longer an English acoustic folk roots duo but a three piece with the addition of Double bassist Miranda Sykes. The lights dim and with no fuss the trio walk on stage and it`s straight into “The Old Lych Way” or Way of the Dead, a haunting but beautiful song from the last release The Long way Home. A song about a traditional Dartmoor burial practise isn`t the most uplifting way to kick off but this is the way things progress with SOH. “Crooked Man“ follows with a slight dig at our former Prime Minister Tony Blair.

The next two songs “The Gamekeeper” and “The Lily and The Rose”, the later sung, wonderfully by Miranda were from a performance at Exeter Cathedral of 19240 Shrouds of the Somme, which honoured the 19240 allied servicemen who fell on the first day of the battle of the Somme. A poignant and heart wrenching reminder of the sacrifices made a century ago and more so, on the eve of Remembrance Day.

Road songs are next, in the form of “Hard Shoulder” and “Next Best Western” one written about Britain and one about America. Steve Knightley laments the fact that place names like Droitwich really don`t inspire road songs. His sister having dated a native of this town. The next part of the show comprises some solo sections and first up is Mr Knightley who performs ”The Flood” a song that talks of the desperate deluges but also of the flood of human misery attempting to enter the UK, in the hope of a better life. The band`s multi-instrumentalist Phil Beer is up next and we get a Billy Bragg type sing a long in the form of “Paper Round” But just before he performs this song he shares the line of the night singing to the tune of a Pink Floyd song “All in all, he`s just another Dick with a Wall” Wonderful. Miranda Sykes completes the solo outings with “How can I get there” a song written by her mother. A very talented family indeed.

The show progresses with “Galway Farmer”, “Make the Right Noises” and “Have No Secrets” before we get a cover of the Cyndi Lauper classic “Time After Time”, it shouldn`t work but it so does. Steve shares the difficulties of explaining the different dialects and mistrust of areas in the UK to a Canadian acquaintance and that a football match between Yeovil and Exeter was like Birmingham v Villa but with pitchforks, prior to performing the song “Roots.”

“Cousin Jack”, “Arrogance Ignorance and Greed” with a nod to Philip Green and “Country Life” close out this excellent ninety minute set. A short break and the troupe return for the much requested “Santiago”

I was shocked to find that the duo have been together since around 1987 so it`s taken me nearly thirty years to see them and I must say it was well worth the wait and effort. Tonight was a magnificent show and I can honestly say that the band had us eating out of the palm of their hands.