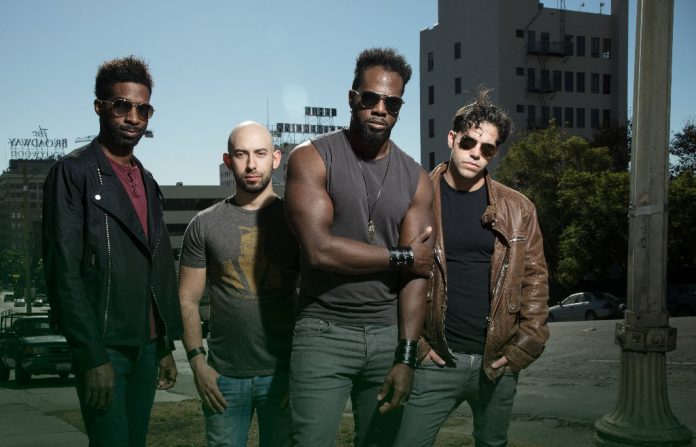 The future heroes of hard rock have arrived in the form of HYVMINE. The American quartet’s stunning debut album Earthquake is out now and the band have unveiled their video for the single ‘Shogun’

Al Joseph (vocals, lead guitars) states: “Earthquake, the album, is a theme built on the unknown paths I’ve chosen to take in my life from here on out. It is a display on how I handle adversity, love and even outright catastrophe. Every song echos the theme, in one way or another. This project to me marks a turning point in my creative mindset for the better. I’m happy that with this music we are aiming to make a positive impact on a vast number of souls to come. I am proud of this record because although it features the reviving of some of my older tunes, it has truly formed itself and shined through all the chaos.

“The ‘Shogun’ music video displays our energy as a band. We’re all just living life without apology. Life without limits. We chose to go with a more simple shoot on the video because we really want to convey that raw performing power of the group. We wanted to deliver as much attitude as we could off the performance alone. ‘Shogun’ is that ‘fuck you’ song that I feel best says, ‘ready or not, here we come!’

“We have a lot going on in 2018 already. With every member of the band finally stepping foot in this industry, we each have a lot planned to show the world what we’ve got. We’re talking tours, shows, clinics, new music and even signature crafted brews. We are here and we are ready!”

HYVMINE play their debut show opening for Intervals and Nick Johnston at Slide Bar in LA on Thursday 25th January.

Head over to https://www.facebook.com/
hyvmineband for all additional information and stay tuned, as international touring will be coming soon.