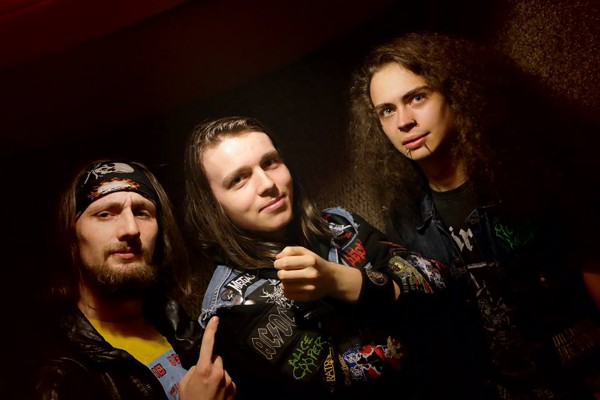 ACID AGE are a three piece Hyper Thrash band from Northern Ireland influenced by various Thrash, Punk and NWOBHM bands. The band consists of Jude McIlwaine on vocals/guitar, Jake Martin on bass and Luke Tolcher on drums. In November 2014 the band has been joined by vocalist Eddie J. Cross so Jude can concentrate on guitar.

Though their style is heavily rooted in the typical thrash of the 1980’s they do however mix in elements of the NWOBHM movement, hardcore punk and even 1950’s Rock ‘n Roll. They call their style “Hyper Thrash” because it is a reflection of their hyper-active stage antics and furiously fast musical style. Acid Age have played with many notable acts including Gama Bomb, The Dangerfields and Putrefy.

Formed on the 7th of January 2013 by Jude McIlwaine, ACID AGE originally took place as a solo recording project (recording the “Cyborg Thrashterpiece” EP) until the addition of drummer Jason Harkness later in the month. By February 2013 ACID AGE were a full band adding bass virtuoso Jake Martin. Their debut album, titled “Enter the Zomborg”, was released by Punkerama Records in November 2013 and featured guest appearances from John Roche (GAMA BOMB) and Tony Portaro (WHIPLASH). In June 2014 Luke Tolcher replaced Jason Harkness on drums.
In mid 2014 the band attracted the attention of Witches Brew from Germany and it was quickly decided that their next album entitled “Drone Shark Ethics” would be on said label. The album was released on the 14th of November and features a guest appearance by Felix Griffin (Ex-D.R.I and BAT).