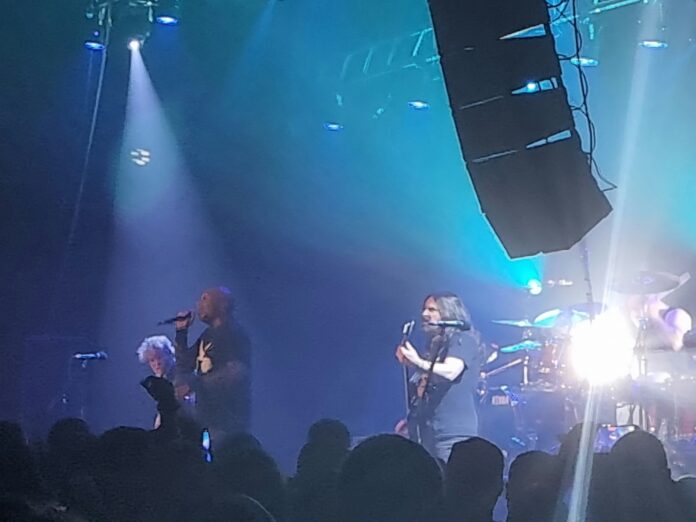 You have to feel a bit for Phil Rind: “It’s my second time here,” smiles the happiest man in thrash. “And I’m 0 for 2 on meeting KK Downing. The man who’s venue this is might not be here (he’s in the US getting inducted into the Rock N Roll Hall Of Fame…..) but the music he helped pioneer is alive and kicking.

I was at that other show  – very nearly four years ago – when Sacred Reich played their first full UK shows in almost a quarter of a century, and everything that was great about them that night was again here.

Arriving as they always do to “The Boys Are Back In Town”, SR deliver what is essentially a masterclass on how this gets done. Opening with “Divide And Conquer” is crucial. It sets the stall out straight away that this is not a nostalgia act. One of five songs from their 2019 record, the new stuff is interspersed with some of their wonderful back catalogue. “The American Way”, is one of those, but its striking how much the fresh material adds. “Manifest Reality” is forward thinking thrash in a way that little is these days, and the title tracks of both “Awakening” and 1987’s “Independence” stand shoulder to shoulder and bridge the generations, almost.

Indeed, surveying the crowd after the former’s breakdown is to see a sea of heads banging in unison, and it was, surely, ever thus? Even the band itself is a mix of old and new Wiley Arnott has – like Rind – been there since the start, but rhythm guitarist Joey Radziwill probably wasn’t born when the band formed. It makes for an odd mix. Indeed, as the punk overtones of “Surf Nicaragua” end the set, it seems time for MV to get on its soap box again.

There’s no need for labels in music, but the one we really don’t need is The Big 4. Megadeth are still making fine records, but elsewhere, the true greats of thrash these days aren’t the other trio, its bands like Testament, Machine Head and most definitely Sacred Reich.

I’ve been thinking a lot recently about the word “seminal”. The bands that got me to the place where my tastes are today. And Sepultura are one of those, and no mistake.

They were well into their career by the time we got the “Chaos AD” album based on a review in Kerrang!. It was –  probably the first album that could be described as “extreme” that I liked.

When they play “Refuse/Resist” – its lead track here – you can watch the phones go up as people record it for posterity, and maybe feel the same as I do about the song, but equally the packed crowd is made up of just as many that are here for the new stuff.  That, essentially, is how you come halfway around the world almost forty years after your debut record and have people turn up in these numbers.

About a month before the world went to hell, and we all went in our houses for 18 months The Seps put out “Quadra”. A ferociously heavy and superb record with a laser guided set of lyrics it is only now that they are getting to show it live. And my goodness, watching tracks like “Isolation” here, you are struck by the power of it, but also the band.

Singer Derrick Greene is a man mountain, “don’t be shy” he tells the moshpit. It appears to have been an order and drummer Eloy Casagrande seems to have a grievance against his drums so hard does he hit them. He was also born five years after the debut album for the band, and is almost a metaphor for how they’ve kept evolving.

For 90 minutes here, they are a study in heaviness. Uncompromising and unremitting, it is striking that in terms of attitude and sonics how little compromise and mellowing there’s been. Whether it’s the trio from “Arise” – back in the early days, with “Infected Voice” and “Dead Embryonic Cells” especially impressive, or one of the pile of new ones they play, the guttural “Guardians Of Earth” or the apocalyptic “Last Time” chief amongst them, this is unmistakably prepared to push the boundaries.

Perhaps that’s because bass man Paulo Jr and guitarist Andreas Kisser are still there as the beating heart of things, and even Greene has been centre stage for 25 years, but whatever Sepultura are band that is unique in the way they do things.

So after “Arise” they are back for an encore. The pair of “Roots” tracks bring us back to that “seminal” thing too. “Ratamahatta” was perhaps the first time I’d ever thought of world music, and watching Kisser and Greene trade the lines here really brings home how ground-breakingly tribal this was.

And of course it ends with “Roots Bloody Roots”, which is one of the few “singalong” moments in the set, but it underlines a theory that the best music doesn’t date.

That’s true for all of this (and Phil Collins’ “Easy Lover” which plays us out of the venue, but I digress) but since 1986 they’ve done what they wanted to, and are now still at the extremes. They might even go slightly under the radar too, in comparison to some of their peers, but Sepultura are one of the most vital and important metal bands of the last 40 years. This felt like a victory lap to celebrate just that.