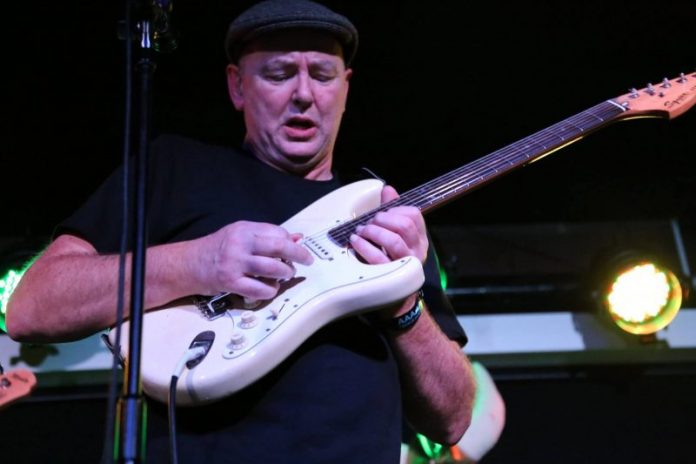 After saying back in late 2014 that he was done with full band touring….the news that came through in December 2016 that Francis Dunnery was returning and better still coming to the heady metropolis of Wolverhampton was the kind of Christmas gift that rates alongside the ultimate joy of receiving a Scalextric set when you were eight years old.
The Slade Rooms date was the second of three gigs that Francis and his wonderful band of minstrels were playing in the UK and by the time the band entered the stage the venue was 95% full and brimming with excitement for an evening of classic It Bites tunes…..a band who have been close to my heart since first seeing them in late 1985 and still remain in my top three bands of all time.
The setlist was pulled from the magnificent ‘Vampires’ album that Francis & band released early in 2016…..reworking’s of It Bites tracks from across the three albums that the band released between 1986-1989…..first up was ‘I Got You Eating Out Of My Hand’ from the debut album…..my word the band were in good form and so were the crowd…..this is exactly what Francis wanted as he explained to me in our recent radio interview a few days prior to the show.
A setlist containing ‘Yellow Christian’, ‘Underneath Your Pillow’, ‘Ice Melts Into Water’, ‘Vampires’, Calling All The Heroes’, ‘Old Man & The Angel’ to name but a few would have been enough to keep any crowd happy but when you add the incredibly funny and often near the knuckle banter that Francis provides, plus band members making toast and reading the newspaper during songs, and support act band member Clayton Hopkins donning the Red Dress & Fox Head from the Genesis ‘Nursery Chryme’ era to help out with backing vocals you have a show that will last long in the memory for all in attendance.
The acoustic sing along version of ‘Kiss Like Judas’ was a real treat as was the blistering ‘Screaming On The Beaches’……but it was just the starter that lead up to the main course for myself personally…..it was time for my favourite track of all time from my favourite album of all time……the majestic ‘Once Around The World’…..this song over the last 29 years has given me goosebumps everytime it’s played….be it live or on record…..it is the ultimate track and the magnificent version on Saturday night ticked every box and then some once again.
The encore ‘Still Too Young To Remember’ was a mass sing along…..how on earth did this not become a huge hit in the charts back in 1989 at a time when the charts in this country still actually meant something is beyond me…..and then after rapturous applause from an ecstatic crowd that was it…..will we see this Sensational band again over here in the UK?…..I certainly hope so…..and so does everyone who was lucky enough to be here on a cold Saturday evening in Wolverhampton.
Francis Dunnery for me is the greatest guitarist of my generation…..but because of poor radio airplay and lazy journalism back in the late 80s he is a talent that many have missed out on, if like me you are a huge fan…..keep spreading the word…..special nights like this don’t happen often, you have to grab hold of them when and where you can…..
But if you can educate a few folk to the wonders of Francis Dunnery & It Bites along the way these nights may just come around more often.
Unchained: Tuesday’s 10pm-Midnight
Prog Rock Files: Thursday’s 10pm-Midnight
101.8WCR FM and online at wcrfm.com