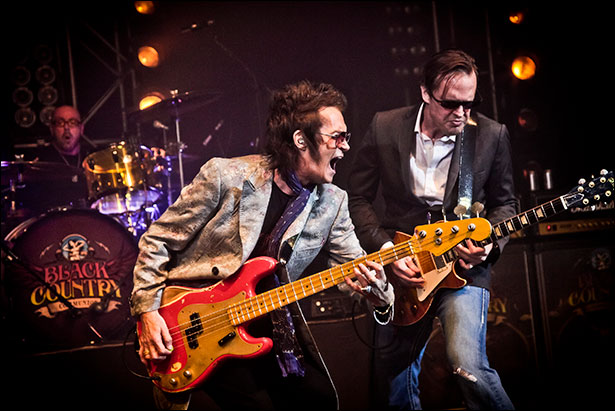 Just like its three predecessors, ‘BCCIV’ was overseen by Kevin Shirley, whose catalogue of hit records for Led Zeppelin, Iron Maiden, Aerosmith, Journey, The Black Crowes, has made him the hottest producer that rock music has to offer. Shirley, who originally had the idea of putting Hughes and Bonamassa in a band after seeing them jamming together onstage in Los Angeles back in November 2009 – is the group’s unofficial ‘fifth member’.

Black Country Communion is an earth-shattering combination of American and British rock influences—a bona fide super group that conveys to the world a simple but important message: classic rock is alive and well, and in good hands in the 21st century. Their communion together forms something that is greater than the sum of its parts, creating a legacy being cemented within the halls of music history.

The initiative for the new album came from Joe Bonamassa, who contacted the band in 2016 to see if they would be up for going back into the studio to write and record a fourth album.

Says Joe, “I just felt the time was right for Black Country Communion to go back into the studio and write and record a new album. When I contacted Glenn, Derek and Jason, they immediately agreed to give it shot. The timing was right.”

During October 2016, when news first broke about the band getting back together, things on Facebook, Instagram and Twitter, started blowing up and fan reaction was overwhelming. It was clear to see that BCC fans were hungry for another album. BCC IV is destined to become one of the biggest hard rock albums of 2017.

Black Country Communion’s inception took place when front man and bass guitarist Glenn Hughes and Joe Bonamassa fused their styles on stage in Los Angeles in November 2009 for an explosive performance at Guitar Center’s King of the Blues event. With the help and guidance of producer Kevin Shirley, they further added to their rock lineage by recruiting drummer Jason Bonham and keyboardist Derek Sherinian