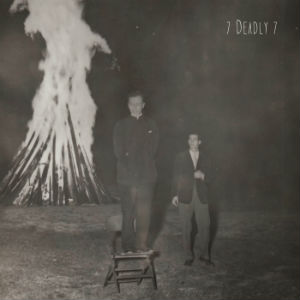 Weve featured Sean Grant and The Wolfgang on these pages a couple of times recently. We were drawn to the darkness that seemed to permeate the songs that we heard but it was more than that.  There were clearly and obviously lofty ambitions contained within their hopes for the band. The first missive about “Seven Deadly Seven said this: “Sean’s frank realism depicts man’s search for meaning across four new tracks in a far more personal way than he’s ever before, drawing on the struggle of everyday life in a modern setting. These four narratives delve into creation, love, temptation, desire, frustration and desperation based on decisions and choices within the environment around us.”

In a world where e very other band is “stoked” that their new album “kicks ass” such considered words stood out like a beacon of quality amongst the morass of froth.

As such, it is entirely good news that the songs that make up the EP back up those words – and then some! The band seem to understand its importance too, given that they’ve roped in Guy Massey (Spiritualized, Manic Street Preachers, Depeche Mode and more) to mix and produce it. He has done a fine job.

First single, rumbles nihilistically into view telling the tale of a man who loves his family and undergoes an existence that sees him “shovelling shit just to cover the scum” – and in so doing hits the nail most squarely on the head and sums up the human condition for many.

Not a record to play at parties – unless like this writer you hate parties – it continues down a dark road, and brilliantly never offers any solutions to the problems it depicts. “Best Of Men” might operate with a slightly sunnier groove, but that only hides the dark for a while, while the primal, blusey feel of the organ and bass infused “Take A Man’s Body” summons up something from the deep.

If this record – as was claimed – really is Grant’s most personal effort, then you imagine the title track which concludes things here is the most important of the bunch. A stark stripped back, hymn link affair, it is almost anti-gospel music as the character in the song – probably the singer himself – rejects the premise of the religion that is forced on him as him as young man.

It is a brilliant and unsettling end to an EP that is both of those things.