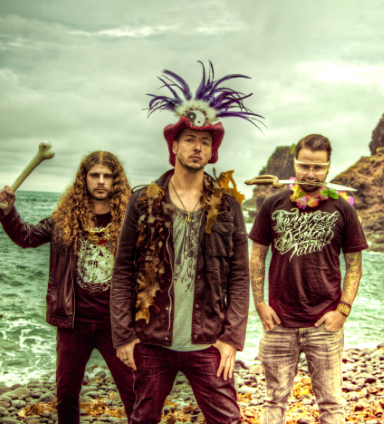 With the blood of legendary bassist and founding member of Iron Maiden, Steve Harris coursing through his veins, Michael John, frontman of Arcane Saints, had little choice but to pursue his passion and talent for songwriting and give music his all, to be part of the industry that his uncle’s band has left such a lasting legacy in.

Born in the United Kingdom, singer/guitarist Michael John, grew up in New Zealand and moved to Melbourne, Australia in search of a bigger rock music scene, and in 2008 Arcane Saints was born.

Immediately the band set out on a relentless touring schedule of Australia, Canada, China and New Zealand, releasing a single which gained the attention of Grammy Award winning producer Toby Wright (Metallica, Alice in Chains, Kiss, Korn.) who invited them to his home town of Nashville, USA to record their debut album Turning The Tide.

Toby was a close friend of Layne Staley, late singer of Alice in Chains and delighted Michael by allowing him to use the custom made microphone Layne had used for the chart topping Alice in Chains EP Jar of Flies.
Peter Keys, pianist from the legendary Lynyrd Skynyrd, made a guest appearance on the album.

The momentum continued with Arcane Saints receiving rave reviews for their performance at Australia’s prestigious Big Day Out Festival, headlined by Pearl Jam.