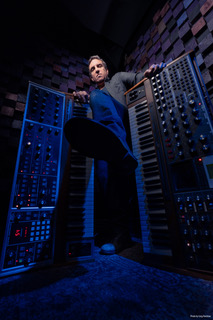 World acclaimed keyboardist Derek Sherinian, (Sons of Apollo, Black Country Communion), one of the most significant keyboard players of the modern era, will be releasing his upcoming new album, ‘Vortex’, on July 1st, 2022 on InsideOutMusic. Returning alongside Sherinian is legendary drummer Simon Phillips, who once again co-wrote and co-produced the album, as well as Tony ‘The Fretless Monster’ Franklin, on bass.

Today, Derek is pleased to release the second single from the album titled “Scorpion.”

Check out the video for “Scorpion” here:

Derek has this to say about the track: “After the great response to “Dragonfly” on my last album, Simon and I wanted to do another piano trio song. Don’t be surprised if you see me going more in this direction in the future.”

Vortex is available as:

Check out the first single “The Vortex” here: