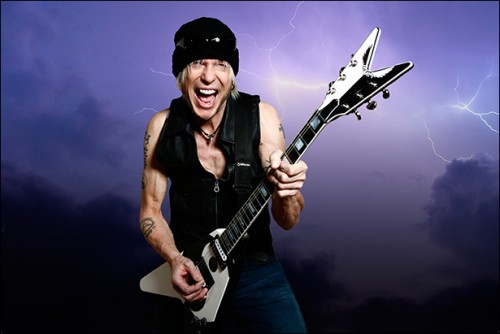 Legendary guitarist Michael Schenker will embark on a nationwide UK tour this December. The lengthy trek – which takes in an appearance at Planet Rockstock  – begins in Newcastle on December 10th.

The tour will be preceded by a new record: “Bridge The Gap” which was written by Schenker and Doogie White, who sings on the album, and they had to learn to collaborate, as they explain: “I sent material to Doogie in the New Year and he started writing melodies and lyrics,” says Schenker. There was a lot of energy flying about during the recording process. I had the same drive making this album as I had when I was 16. I wanted it fast, heavy and melodic. It felt like bridging the gap from my teenage and Lovedrive years to what I am doing now. I’m back to where I was a long time ago and I love it.”

“Never having really written with Michael before, apart from When the Devil Knows You’re Dead (from 2011’s Temple of Rock album), I didn’t know how flexible he would be writing wise,” recalls Doogie.” I recorded some vocal tracks as ideas and when Michael heard them we were off and running. Within two weeks we were in the studio laying down tracks.”

Schenker admits that when he wrote this album, he tried to get a balance between songs that are heavy, fast and melodic, complimented by his signature guitar solos.

“I wanted to combine the old with the new,” says Schenker. “That’s why the album’s called Bridge The Gap. With Wayne playing 7 string guitar we created some low, heavy modern sounds. Since I play and experiment on a regular basis, I always have some new, fresh sparks to share when I record a new album. I am inspired from within. It’s infinite like a kaleidoscope.”

“As former members of the Scorpions, Herman, Francis and I have been out of the loop of rock’n’roll for quite a while. Getting together for the first time since the Lovedrive album is an incredible jump. We’re connecting the past with the present. We’re bridging the gap.”

The album’s lead single has been released on YouTube