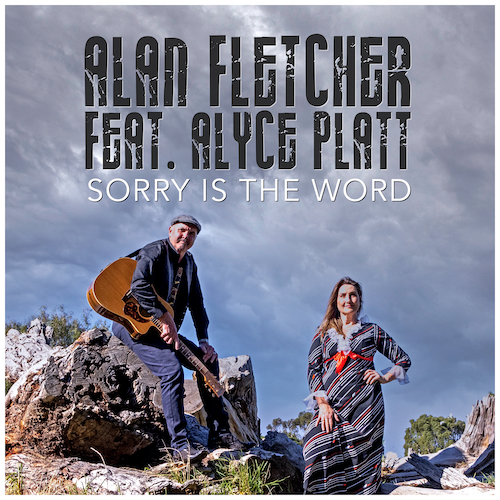 One of Australia’s most instantly recognisable and loved actors, Alan Fletcher, has teamed up with fellow actor and singer, Alyce Platt, on the brand new duet, ‘Sorry Is The Word‘. Written by Fletcher and produced by the Alt-Country dream team of Lachlan Bryan and Damien Cafarella, ‘Sorry Is The Word’ is a bittersweet song about relationships failing due to pride and a lack of communication.

“Like a lot of songs, ‘Sorry Is The Word’ came from my own life experience. I have learnt over time that pride and an inability to accept blame and apologise is responsible for so much heartache and missed opportunities,” shared Alan. “I believe a lot of marriages fail because each partner tries to mould the other to meet their expectations rather than accept each other’s flaws and foibles and learn to respect them.”

Joining Alan on ‘Sorry Is The Word’ is his Neighbours co-star and fellow singer, Alyce Platt. She is also known for her work on Sons & Daughters and City Homicide and was one of Australia’s highest-profile stars as co-host of Sale of The Century. Alyce has released three albums since 2004 with her most recent in 2015.

Alan says, “I wanted to write a classic country duet. That has become such a traditional medium for telling stories about love and loss. Duets allow for truthful emotional expressions with irony.”

For 27 years, Fletcher has portrayed the character, Karl Kennedy, on the iconic Australian television drama, Neighbours. He has also appeared in Cop Shop and in the US series, The Love Boat. His first forays into music were with the rock band, Waiting Room, in 2004 – releasing two albums and a single. The band has toured the UK ten times in eight years performing to sell-out crowds and maintaining a weekly residency in Melbourne for 12 years.

In 2020, Alan joined forces with Lachlan Bryan and Damien Cafarella at their Melbourne studio, End of the Road, to realise his passion for Americana and Folk music. The resulting album, Dispatches, slated for release later in the year, will be previewed at a special live show during the Tamworth Country Music Festival in Australia on Tuesday 19th April.

Additionally, Alan Fletcher will be touring the UK in September 2022 with performances of his stage show ‘The Doctor Will See You Now’ – The Life and Times of Dr Karl Kennedy – dates and ticket details to follow.

‘Sorry Is The Word’ – is out today (8/4) via MGM and available to stream/download now – listen here.

ABOUT ALAN FLETCHER:
Alan Fletcher is known worldwide for his portrayal of the character Dr Karl Kennedy on the iconic Australian Drama Neighbours, a role he has performed for 27 years. Alan’s first forays into music were with the rock band Waiting Room that formed in 2004 and went on to release two albums and a single. The band toured the UK ten times in eight years performing to sell-out crowds and maintained a weekly residency in Melbourne for 12 years. ‘Sorry Is The Word’ is the first release from his upcoming debut Americana album Dispatches. Official Site | Facebook | Instagram | Twitter