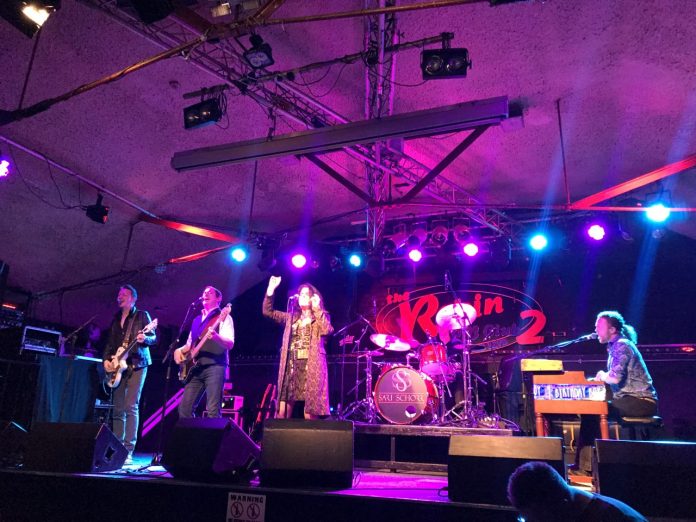 It’s interesting to watch an artist develop in front of your eyes.

At precisely 10-30 on a cold Black Country night, Sari Schorr is doing her encore of “Black Betty” and there’s a bit when she does it usually and the thing kicks in. Tonight, when it does, at the start of the second verse, is officially when they arrive.

The five-piece kicked off this tour in Leicester last Autumn. I was there, and here, in the spring, it is clear that this band and this singer have developed into one of the finest blues units there is.

No longer powered by her old crew the Engine Room, and without being disrespectful to anyone in that wonderful outfit, adding Ash Wilson on guitar, Roy Martin on drums, Mat Beable on bass and crucially Bob Fridzema on keys has elevated this to another level.

Sari herself, well, there’s no better voice anywhere. In any genre, than hers. And her command of a stage is improving all the time too.

Much of that comes from the fact that last year’s “Never Say Never” album was astoundingly good. As ever, these days, she begins with one of its songs. “A New Revolution”, perhaps apt, given that it heralded a slight shift in sound too, as following it up with the darker and bluesier “Damn The Reason” from her debut “Force Of Nature” rather proves.

Not a huge departure, but enough. “King Of Rock N Roll” and the break up anthem “Thank You” are more rock orientated than before (and that means since last Autumn too) and the fact that she manages to own “Ready For Love” probably explains more about Schorr than anything else.

Splitting the show into two sets gives “Maybe I’m Foolin’” the chance to be the closing tune, as it was with King King a few months back, but also means that keeping the momentum is a challenge. Well, usually.

The second half opens with a cover of “I Just Want To Make Love To You”. Standard it might be, but here Wilson and Fridzema cut loose.

It is testament to the band that they can change gear perfectly for the gorgeous title track of the new album, and the Stones-ish stomper “Valentina”.

“Freedom”, arguably the heaviest thing here, is a passionate pacifists plea, and sounds more like Bad Company than “….Love” did earlier.

Which brings us back to the beginning, and after “….Betty” there’s one that sounds like Petty, so to speak. “Back To LA”, and it has the West Coast feel. So does Schorr actually, for all that she’s from New York, there is something of the LA sunshine about her.

And having watched her grow over the last few years, there is a real feel that she is only just getting started.