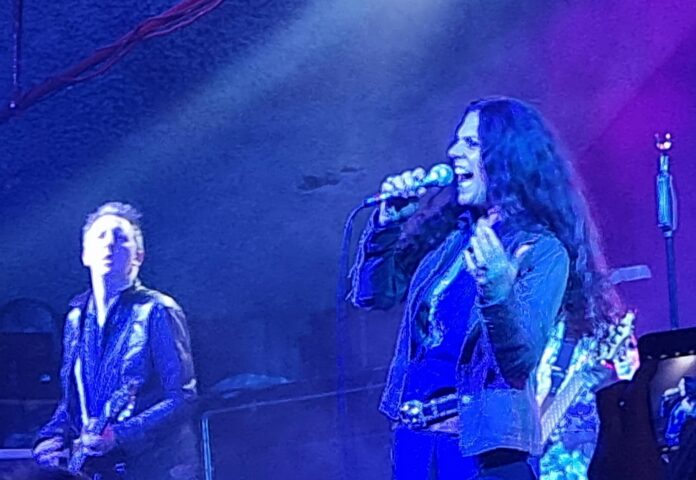 When a band says: “we’re not like other bands” it’s a cliché that can usually be disproved due to them being exactly like other bands. Birmingham’s Blue Nation, mind you, are the exception. For one thing their drummer first rehearsed with them on Sunday. Their usual sticksman is on tour with Robert Plant (“we had to let him go” reasons Neil Murdoch, the bands singer/guitarist/chatterbox) and Barney does a sterling job. That’s not the only thing that marks them out as different, though. They have a sound that doesn’t fit in. “Gimmie Some Time” settles into their strange kind of groove, but for a lot of the 40 minutes, they are merrily playing the tracks that will make up their EP in the autumn, “The Reason” has monster riff right in the middle, while an older one, “Come Back Home” is a touch sedate. Another new song “Echoes” which Murdoch reckons is the song he is most proud of, has an arena filling quality that recalls Stereophonics. The brand new single “I Feel Low” has fitted right in to the set, underlining as it, did the step up that seems to have gone on with the later stuff. Saying that, they end with “Down to The River” which has been in the canon for as long as MV has been watching them, and the quality of that earlier work shines still too. The most dapper band in Birmingham, the one that was too blues to rock, too rock for blues, and too indie for all of them, Blue Nation are ready to make their mark. After all, when you fit in nowhere, you can go anywhere you like.

We all know the last two years didn’t count, but still, it comes as something of a shock that it is three years (give or take two days) since I saw Sari Schorr. She’d played this room, and the last line I wrote that night was: “And having watched [Sari] grow over the last few years, there is a real feel that she is only just getting started.”

Given the enforced pause afterwards, I guess those words are more prophetic than they might have been, but as “Maybe I’m Fooling” starts things off again here, it really does feel like time has been washed away.

Such is the way, I suppose, when you’re dealing with a talent like this. The New Yorker is an incredible performer. A brilliant singer – honestly one of the best there is – but with a warmth. And a twinkle in the eye too. She knows how to work a crowd, and is busy flirting like Phil Lynott through “Kiss Me” and “Demolition Man”, but honestly, this is just about great songs, played by a great band with a great singer.

Working with the same band she had those three years back. Ash Wilson is a fine lead player, Roger Innes has been bass man with everyone, Ray Martin on drums, and of course, Bob Fridzema on keys is as good as there is. The four of them are important because they give Schorr the Premier League support she needs.

Sari and her lads, though are not a conventional blues band. “Back To LA” has a Tom Petty vibe, while “Turn The Radio On” is merely a heartbeat away from being in Laurel Canyon and some late 60s trip.

“New Revolution” almost ushers in the second half, and “Freedom” is heartfelt and dedicated to the people of Ukraine (the singers’ family are from the stricken country), while “King Of Rock N Roll” is probably her finest moment (albeit she now has three brilliant studio records in her catalogue).

Schorr is a superb interpreter of songs too. She uses them sparingly, but “Ready For Love” is given her own stamp (you can’t compete with Bad Company, after all).  The real showstopper of the covers, however, is “Black Betty”, which she now plays as a medley with “In The Pines”. She’d always done “….Betty” but this is different now, and the band are all buying into it.  That finishes the set, but there’s an encore of “Valentina” (“she’s a little bit close to home for comfort” smiles Schorr of the character in the song.

It is perhaps a cliché for which I apologise, but the 18 months where there were no gigs was a long desperate wasteland it seemed. Maybe bands felt that way too. It certainly seems that way given the feel of this concert. If you want to see what it’s like when you forget the bad stuff, then this is how to fast forward three years in a 90 minute set.