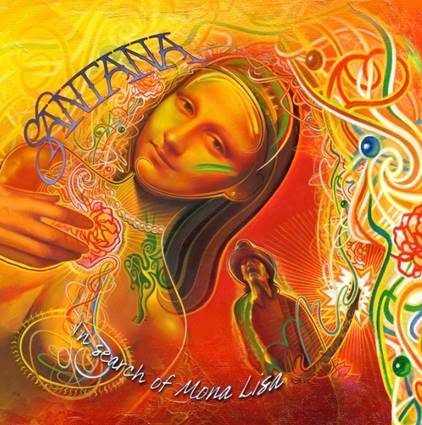 Legendary musician Carlos Santana releases his new EP ‘In Search of Mona Lisa’, out on 25 January via Concord Records. On three spellbinding and transportive new songs, the multiple Grammy award-winning guitarist and Rock’n’Roll Hall of Fame inductee takes listeners inside a magical and deeply personal experience he had when he visited the Louvre Museum for the first time and set his eyes on Leonardo da Vinci’s beguiling masterpiece.

In all the years that the guitar icon had visited Paris, he had never been to the Louvre, but on a recent day off while on tour, he decided to go to the museum with his wife, drummer Cindy Blackman Santana, and his family. All it took was one look into the implacable eyes of the Mona Lisa for Santana to feel as though something strange and powerful was taking place.

As he recalls, “I heard her say to me, ‘Hi.’ It was stunning, and I didn’t know what to say back, so I just said, ‘Hi.’ And then she said, ‘Do you remember me? When we were lovers in another time?’ It was the most incredible occurrence, and in a way, it was kind of perfect that I had never been to the Louvre before, because this might not have happened at another time. I had to be who I am now, knowing that God is everywhere and that He was saying, ‘I love you,’ by sending me this message of inspiration and visualization.”

The experience came flooding back to Santana months later, when he awoke from a dream with the lyrics to what would become the songs ‘In Search of Mona Lisa’ and ‘Do You Remember Me’ fully formed in his mind. “It was the first time that I ever woke up and lyrics were there in a tangible way. I could just grab them and write the songs.”

‘In Search of Mona Lisa’ is a remarkable body of work, featuring 3 original tracks all with true Santana sensuality. The opening track is an invitation to dance, and after the band kicks in with a graceful Afro-Cuban groove (courtesy of Cindy on drums, with Karl Perazzo on congas, timbales and percussion), Santana opens up on a full five minutes of some of his most gorgeous soloing yet.

Remarkably, the song was captured in a single take in which Santana and his band recorded with Rick Rubin at the renowned producer’s Shangri-la Studio in Malibu. “Miles Davis and Bob Dylan always said that the first take is the best, and I have to agree. You can hear the innocence in the music. That’s a nutrient that’s missing on this planet right now.”

The EP’s title track sets an entirely different mood with Grammy winning producer Narada Michael Walden offering an energetic drum beat, with Santana and singer Cornell “CC” Carter on vocals, before closing with an impassioned extended guitar solo from the legend. The final track, ‘Lovers From Another Time’, unfolds much like the painting that inspired the music itself, with the dual drumming of Cindy and Walden mixing with Carter’s elegant basslines to create a living and breathing canvas on which Santana splashes vibrant six-string colours and textures.

Over the past 5 decades, Santana has sold over 100 million records and has performed for three generations of concert fans worldwide. To date, Santana has won 10 Grammy Awards and three Latin Grammys. He won an incredible nine Grammy’s for his 1999 album ‘Supernatural’ – which celebrates its 20th Anniversary this year – including ‘Album of the Year’.

Santana’s extraordinary new EP ‘In Search of Mona Lisa’ is out now on Concord Records.