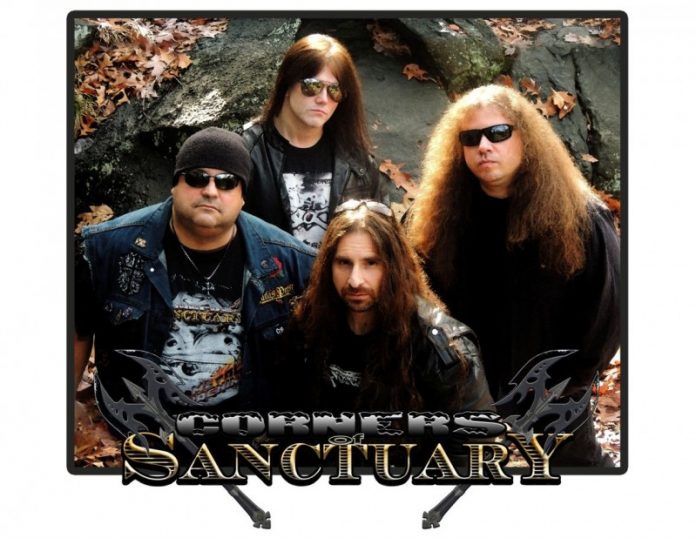 CORNERS OF SANCTUARY has announced the official release of their second music video for “Wrecking Ball” from the album Metal Machine released on Metalizer Records from Germany. The new effort follows last December’s video for “Left Scarred.”

Corners of Sanctuary guitarist Mick Michaels has checked in with the following comment: We planned to include a heavier visual support for Metal Machine, more than we had done in the past with previous albums.Expect at least two more videos to follow in the coming months.

The Wrecking Ball video, as with the previous one, was produced and directed by Philadelphia-area Indie artist Zen Say. who stated: “It’s been a pleasure working with Corners of Sanctuary and sharing ideas across multiple mediums”.

“Wrecking Ball” incorporates the now public domain scenes from the 1936 British science-fiction film, “Things to Come” – an adaptation of H.G. Well’s story depicting a world at war. The original film was produced by Alexander Korda and directed by William Cameron Menzies. The music video is also laced with on location shots filmed with the band.

The video’s message is centered on the horror and devastation brought on during such conflicts and the effects it has on every walk of life. “Though the clips of the movie are based on a fictional story, the reality of what war holds is all too real to simply dismiss,” added Zen Say.

“This song captures the horror, patriotism and pride of war while the images convey a seriously, emotional landscape. The metaphor of the song will be clearly felt by some… like a wrecking ball, “stated lead singer Frankie Cross when asked about his take on the video’s backdrop of war for the song. ”It’s just so beautifully frantic… the true star is the production team,” he added.

Corners of Sanctuary is currently supporting Metal Machine with a string of live performances throughout 2016 including shows with Butcher Babies, Mind Assassin, and Killen along with performances at the 2016 NEPA Metal Meltdown Festival and this summer’s Metal Eternal Fest Tour.

A COS Crowdfunding page has been created to support the band’s touring efforts and is now live at their official website: :

Fans’ financial support is being gifted with several Official COS Metal Machine Merchandise Packages which include autographed photos and CDs, concert shirts, patches and supporters having their names listed on the COS website.