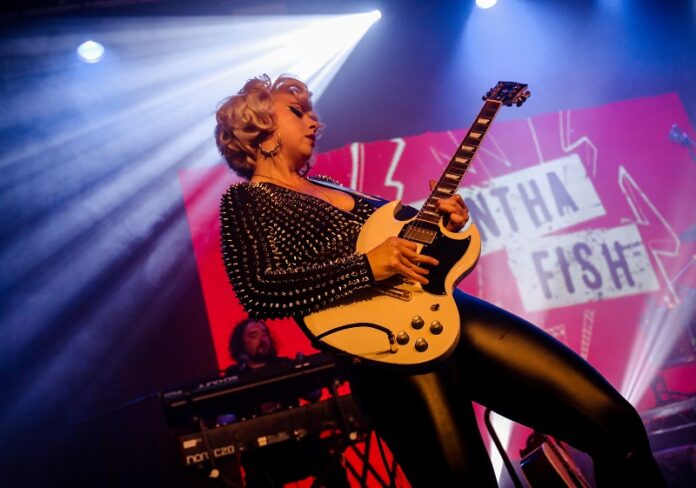 The sight of Wille And The Bandits on any stage, anywhere is always to be welcomed. And having seen them grow over the last five years or so, then I’d argue that they are better than ever. Expanded in recent years, this new line up is capable of one of the most varied sets around. Veering as it does from funky strut – “Keep It On The Down Low” – to something more serious like “Still Go Marching On”, dedicated here to the people of Ukraine. This is a band for whom music matters. Not image. “It’s great to be in the midlands, man” exclaims Wille Edwards – one of the best slide guitar players you’ll ever see – “you’ve got so many great bands, down where we’re from we’ve got The Wurzels!” There’s a point to this joke, too. They are products of the South West, their sound belongs (in a similar way to Seth Lakeman) to that landscape, but their dreams extend beyond. Recently, their work has evolved into a more rock n roll sphere. “Good Stuff” is a celebration, perhaps more than ever we need to lose ourselves in music? And “1970” is not just the era that birthed this sound, it’s a fabulous statement from a band that is at its best, but surely not its peak.

When you watch Samantha Fish it is, of course, her playing you notice first. Goodness me, the way she plays that Cigar Box guitar on the opening “Bulletproof” alone is good enough to create its headlines all by itself, but there’s something else too.

Her voice. Her voice is one of the most underrated. She’s onstage here for almost an hour and a half and the sheer breadth of her material requires so many changes in tone, that she simply has to be able to sing to pull it all off.

One of those artists that gets called “blues” but for whom that doesn’t seem to quite fit, for example on “Twisted Ambition” her solo is wonderful, but she follows it up with the stone cold sass of “Chills And Fever.” That one, though, is really the first time to fully appreciate her band. Matt Wade on organ is integral to the sound throughout and he’s in the spotlight here.

The light and shade of the set is highlighted again with “Highways Holding Me Now” (“a Samantha Fish rock hit” she reckons) giving way to “Hypnotic”, which wouldn’t be out of place on a Prince album, before “No Angels” does, rather cheerfully, ramp up the blues aspect of it all.

It’s been a while since I saw Fish and her stage presence has gone up a notch in the interim. The crowd at KK’s is large but quiet and she’s not prepared to accept it, instead she’s on the front foot. “you wanna be polite?” she chides in “Bitch On The Run”, “well the record company is here tonight, so you’d best step up” (there may have been some extra adjectives in there too….) It’s a contention that three years ago she might not have been as in your face.

It suits her, and the country “Dream Girl” and the massive blues thumper of “Black Wind Howling” benefit from the extra frisson of excitement.

The encore sort of ties the loose ends up, and “Don’t Let It Bring You Down” is given a new sheen from the Neil Young original, but as she plays out the solo, then one thing is clear above all. Samantha Fish is a Premier League performer, just one that doesn’t play by rules. Here’ the blues is a thread that runs through things, rather than its sole reason for being.