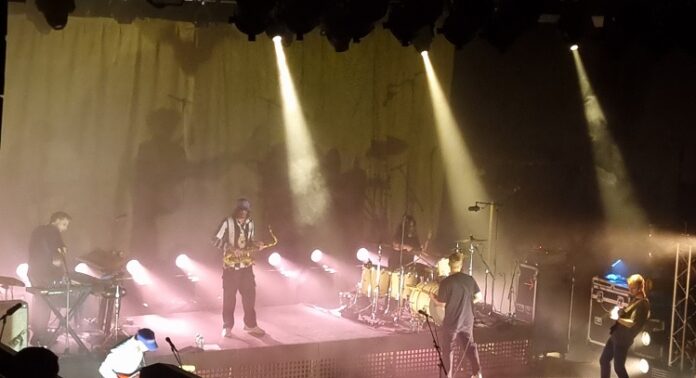 Sam Fender can’t help grin. I’ve seen many of these things over the years. This one, though, is genuine. “Well, no one’s done that before!” he says.

“That” to be precise, is this: The band have just played “Seventeen Going Under” – a track from the album that Fender hasn’t released yet – and 1400 Brummies (this gig sold out as soon as it was announced) have carried on singing the harmonies.

Nothing, really, shows the dynamic here better than that. Here stands Fender, on the brink of arena stardom, and he’s still kind of blown away by the adulation. Except he’s not, not really, he knows he’s good. He knows its his time, and the hour he plays here proves it.

This show had been cancelled a couple of times even before lockdown. So the line “well, this took fucking long enough, eh Birmingham?” has a little more resonance than normal, nonetheless, as they play “Will We Talk?” it’d be a stretch not to imagine the last 18 months as some nightmarish dream.

This is a short gig, but it’s a slick professional one too. “Dead Boys” sees them play bathed in blue light, and Johnny “Bluehat” Davis” joins on sax for “All Is On My Side”. He barely leaves in the rest of the show, and its not making any leaps to say that he is integral to the sound in a way that happened somewhere else when the big man joined the band, as it were.

After an emotional “The Borders” (“its my favourite song on the album”) something happens: Things get heavy in a way that they don’t on the record. “Spice” and “Howden Aldi Death Queue” (surely the best song title about lockdown?) engender a moshpit  – proudly too. There’s more than a touch of QOTSA in the latter especially.

Which is kind of where the review started, as “…..Under” is thrillingly communal, and “Play God” both pulses – and is welcomed as an old friend at the same time.

An insight into what this artist could have been if he’d so desired is given as he covers “Dancing In The Dark” solo. It’s a song I’ve always thought lent itself to fragility rather than bombast, and so it is here. “I wanna change my clothes, my hair face….” Maybe there’s an anxiety here? If there is, though, “Saturday” is ready for bigger venues than this, that’s for sure.

As is the last one: “The one that started it all,” offers Fender. What he means is that “Hypersonic Missiles” sent him and his mates in the band (and it feels like a band) off on the road to stardom.

Watching him here, its hard not to imagine that the future for Fender and the boys is in arenas. They all stand on the cusp, and everyone here – band and crowd – knows it.