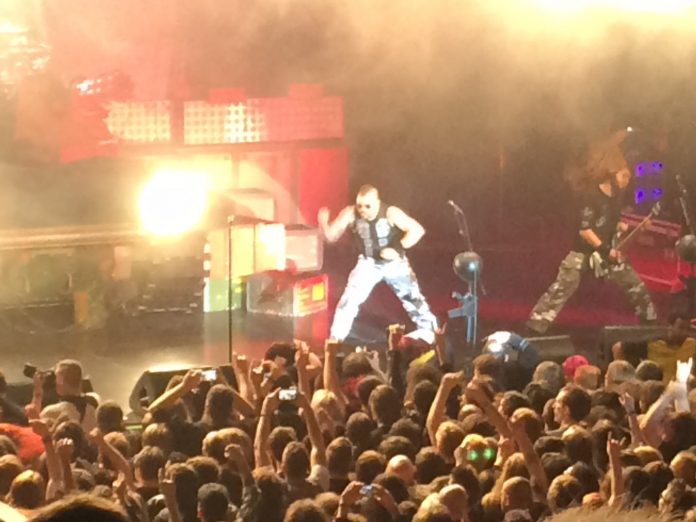 For Sweden’s Bloodbound, it might be the first time they’ve ever played a gig in this city, but my goodness that’s where their hearts have been all their lives. Everything about them screams Maiden and Priest and they don’t really care if you work that out. The key to their set comes in the middle of their very entertaining 40 minutes. “Metalheads Unite” and “In The Name Of Metal” are fists in the air and anthemic and if it’s full of more cheese than the Wallace And Gromit Christmas Special, then that supposes that the band were aiming for something different than this. You’d imagine that the fact they introduce closing song “Nosferatu” with a roadie dressed up as the eponymous hero of the song is an indication they are in on the joke. When singer Patrik Johansson says “scream for me, Birmingham” you sense he’s wanted to do it all his life, and there’s evident joy here for Bloodbound. The perfect opening act for this show.

If the Fray Bentos Pie tin on the drum riser doesn’t give it away, then the giant inflatable duck that dominates the stage might. Alestorm are not your normal band. As singer Christopher Bowes suggests: “we must have been insane when we thought this was good idea….mind you I still think it’s a good idea, so I must still be insane”. Strange onstage props notwithstanding Alestorm have rather cornered the market in Pirate Metal. This is largely because they are absolutely brilliant at what they do, and furthermore songs like “Keelhauled” and “Shipwrecked” are marvellous. Huge catchy things with great big hooks and bigger choruses, no one else does this quite as well.

Mischievous and impish, they slow it down for “Nancy The Tavern Wench”, with Bowes adding: “we usually dedicate this to the beautiful women in the audience, but this is Birmingham so it’s slim pickings….” while, if you are gong to call a song “Wenches And Mead” then, damn it’d better sound like this one does. Even their calling card of “Rum” has taken on almost hysterical status by now, hell, even their cover of Taio Cruz’s “Hangover” works. There’s no band quite like Alestorm, and there’s no inflatable duck like their inflatable duck

One of the most pleasing things in metal in recent years has been the rise of Sabaton. Unbelievably Joakim Brodén and his merry men have never played Birmingham before in their 17 year history, but they are no strangers to this area. Frequent visitors, they’ve paid their dues and they’ve got pretty big. So big in fact that 2000 pretty delirious Brummies greet them tonight as they race out after the usual run through of “The Final Countdown” to play “Ghost Division”. What follows is essentially a tikka tape parade, and for an hour and a quarter Sabaton joyously celebrate what got them here.

A career-spanning set is full of glorious songs – and the setlist is much changed since 15 months ago when they were last headliners over here – “Uprising” and “Midway”, both from the wonderful “Coat Of Arms” record are delivered with glee, and “Swedish Pagans” is a collective singalong.

There’s plenty of recent material too, “Carolus Rex” is mighty and muscular and the selections taken off the “Heroes” album from a couple of years back more than stand up with the rest. “Soldier Of 3 Armies” and “To Hell And Back” – so good it’s used to close the set, are very special indeed.

But the reason Sabaton resonate so much is more than just the great music. It’s the obvious enjoyment the band get from being onstage – and blimey, they’ve got the drums done up as a tank, who wouldn’t enjoy that? – there’s knockabout humour here, with Brodén threatening to leave the stage at one point, there’s an impromptu cover of “YMCA”, “IKEA” is chanted more than once, and there’s enough smiles here to make everyone convinced it’s worth the blood, sweat and tears.

Given a heroes reception when they return for the encores, they convert what is effectively an open goal by chucking in “Primo Victoria” and their anthem “Metal Crue” after which they milk the applause for all its worth.

The reception is well deserved too, because Sabaton are living proof that hard work and great songs still count for for nearly everything. And on this evidence, they are verging on an unstoppable force.