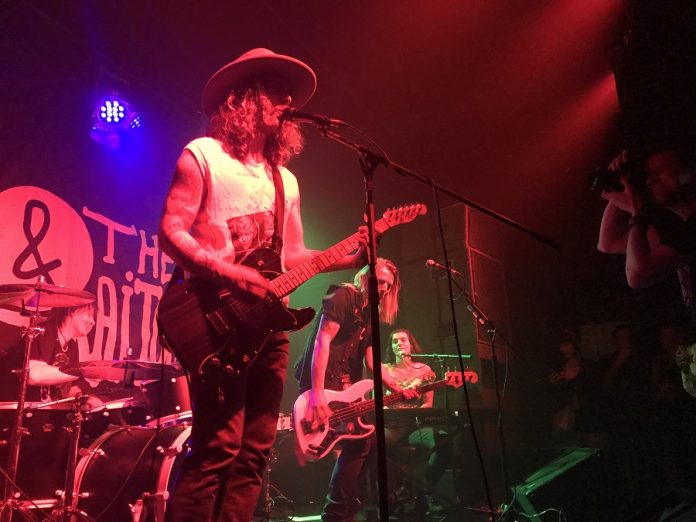 Ryan’s back. And this time he’s been drinking

While with most bands, it would be a line: “We’re having the best time on this tour” says Ryan Hamilton. You know with the Texan and his band of Traitors that he means every word.

They are back in Birmingham six months after his last stint, a sort of acoustic show as winter turned to spring. Even if it is grey outside and we are having a damp squib of a summer, then Hamilton manages to bring sunshine each time he plays.

This time fully electric and pretty much full on rock n roll, the dynamic of the band is to the fore on “Drugs And Fashion” a glammed up stomper and “Records And Needles” is as loose-limbed as the Stones are at their most catchy, but this is about more than that.

It is about the vibe of friendliness (“we’re the band who checks our ego at the door”, he says in another of those things that seems like a line but absolutely is not) it’s about fun – not least because Ryan has been drinking “since 11 this morning” – but it’s mostly about some of the most hook-filled and unashamed pop rock around.

There are elements of Honeycrack at their best about “Strength In Numbers” and the joy in “Never Should Have Moved To LA” is palpable, while the gregarious frontman carries the whole thing with a naturally chatty air.

Indica Campbell, daughter of UB40 frontman Ali, duets on the beautiful “Heavy Heart” before the bands (well deserved) breakthrough single “Smarter” is a slice of class, even if there is a little more truth in the line “I’m not sober” than usual…..

A keen supporter of anti-bullying charities, Hamilton plays his punk rock condemnation of online trolls, “Ode To Idiots” and it sounds like the best b-side The Wildhearts didn’t have, before the laid back “Truth On Tape” (the huge hit of his former band Smile Smile) is the perfect counter-balance.

Before the end there are a couple more reasons why we should treasure Hamilton. First of all there’s no encore – rock stars do them and however brilliant he is, he’s not a rock star – then there’s the fact, that seemingly at random, he adds a solo version of “Gulf Of Mexico” to the set – drummer Mickey sits with his feet up on the drums throughout – before “Four Letter Verb” ends things in raucous fashion.

The rare sight of a band and its crowd completely as one. This doesn’t just happen it has been worked on. Hamilton is a man who has experienced the business side of the music business and come out the other side. Nights like this are his – and his audience’s – reward.