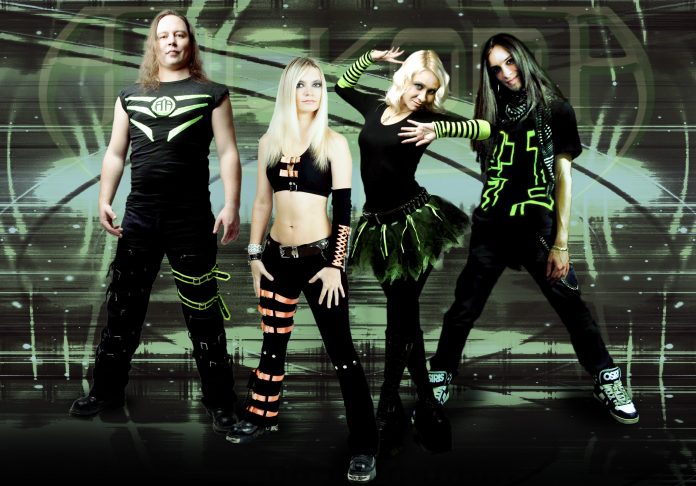 Their new EP title means “Extreme” in Russian. But Anckora are going for it in the West. Meet the new Russian queens of heavy.

ANCKORA’s first gig took place on July 4, 2007 in Tochka, a club in Moscow. The band originally used to play heavy metal. Years passed, musicians came and went, the band had a lot of gigs all over Russia, a tour across Ukraine (supporting ILLIDIANCE, Russia’s most famous cyber-metal band). After the tour the band had a major gig in Moscow. After that its members decided to follow their heart and change the band’s style making it more modern and adding some electronic sound.

The decision resulted in a principle change of the musical style. In October 2011 the band successfully presented its first full-size album “Machine”. The following month, in December 2011, ANCKORA went on a tour to promote the release. It was then that the members of the band first experimented with LED and laser lights to accompany the show.

In 2012 a number of concerts were followed by a principal change of musicians. Only two original members remained in the band: Evgeny “JonPriest” and Katrin “Antares”. The renewed band celebrated its 5-th anniversary with an Industrial Birthday Tour across the North of Russia. Both the sound and the show were brought to a whole new level. The band now had its distinctive, easily recognizable features.

After a summer of open air festivals the band settled down to record its second full-size album. For a short time the work was interrupted by an autumn tour together with Dreamtale, a band from Finland. Having returned home, ANCKORA got back into the studio. The album entitled “Open the Door for Me” was presented to the audience on February 23, 2013. After that the band went on a tour across Russia and Belаrus to promote it.

In summer the band attended a number of open air festivals with its new show. Among them was the 2-day-long international Metal Crowd festival in Belarus, where ANCKORA performed a closing shoe on one of the stages while warming up the audience for the Swiss SYBREED.

At the end of the year ANCKORA set off on a tour across Finland and Russia which closely followed the release of “Extreme Initiation”, a split-album with the Finnish death-metal band Roadkill Decorum.

Early 2014 was related to major changes in the band, which unlike two years before affected neither the band’s gigs nor the recording process. After several gigs in Russia ANCKORA decided to change their sound once again, adding a second guitar. The band produced “Extreme”, an EP album with several songs from “Extreme Initiation” and a new one which among other things vividly presented the band’s renewed sound.