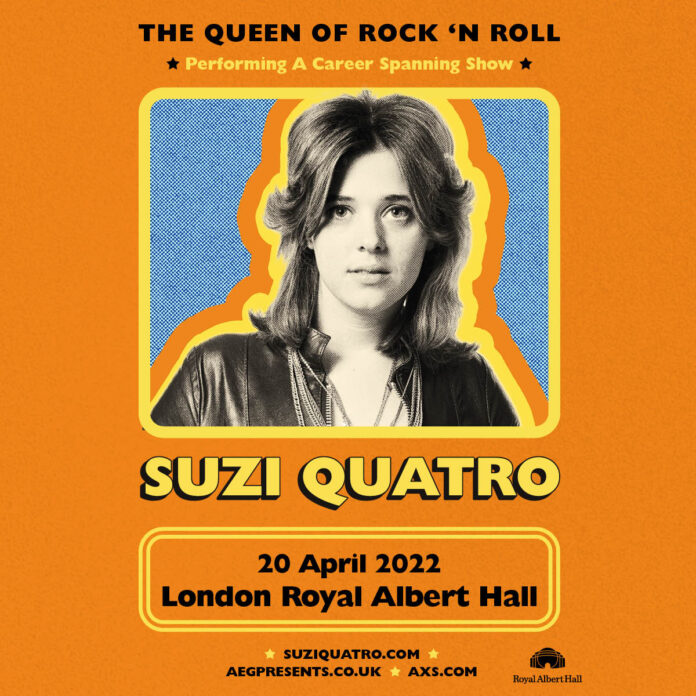 Suzi Quatro is the trailblazing Queen of Rock’ n’ Roll. Not only a global legend who has sold over 55 million records worldwide, she is also a record producer, actress (Happy Days, Minder, Absolutely Fabulous, Dempsey and Makepeace, Rock School), poet, author and radio presenter (BBC Radio 2).

This year, Suzi is celebrating an incredible 58 years in the music business by performing a hit-packed, career-spanning live show at the Royal Albert Hall in London. She said, “I’m honoured to be performing at such an iconic venue. I’ll be playing a two-hour show – so be ready to get royally rocked. I can’t wait!”.

Detroit-born Suzi grew up in a musical family, forming her first band The Pleasure Seekers aged just 14 with her sisters, they recorded three singles.

In 1971, Suzi moved to England to work with celebrated producer Mickie Most. She first came to the attention of the British public as a support act alongside Thin Lizzy on Slade’s first nationwide tour of the UK. Then in 1972, she released her first single as a solo artist – Rolling Stone. She released a string of hits in the years following, including two Number 1 songs; Can the Can and Devil Gate Drive.

In 1999 Suzi began her radio career with a series of weekly programmes and notable documentaries on BBC Radio 2.

In 2006, Suzi was nominated for Music Broadcaster of the Year at the Sony Music Awards. She is the recipient of the Woman of Valour Award from the organisation Musicians for Equal Opportunities for Women. Suzi was inducted into the Michigan Rock and Roll Legends Hall of Fame (2013) and, in the same year, received the Distinguished Lifetime Achievement Award at the Detroit Music Awards.